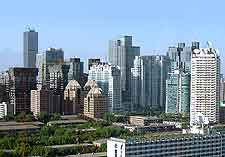 Beijing is one of the most famous cities in the whole of the People's Republic of China and home to some of the country's most outstanding sights and temples. A buzzing city where there is always plenty of action, during your trip to Beijing you can expect to visit the Forbidden City, the Great Wall of China, the Temple of Heaven Park and much more besides, whilst shopping and eating to your heart's content.

The best shopping districts lie around Wangfujing Dajie, Xidan and also Qianmen, which is close to Tiananmen Square. Most exceptional restaurants are also located in these areas of Beijing, serving traditional Chinese cuisine at its best, together with more international and Western-style food. 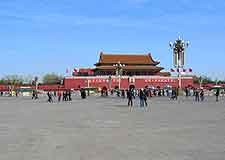 When you first arrive in the city of Beijing, it can appear a little disorganised, although this is by no means the case. The city proper is very orderly in its design and at its very heart the Forbidden City links many prominent thoroughfares. An English-speaking map is always useful when trying to find your way around Beijing and various versions can be picked up at the many Tourist Information Centres. Tourism outlets are available all around the city, including tourism bureaus in the Chaoyang, Dongcheng, Fengtai, Haidian, Xicheng and Xuanwu districts. 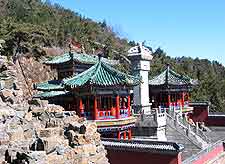 The city of Beijing is simply bursting with tourist attractions for each member of the family. Be sure to visit the animals at Beijing Zoo, the ancient complex of the Forbidden City, the nearby stretch of the Great Wall of China and also the Summer Palace, an important World Heritage site. Other top tourist attractions include the distinctive Temple of Heaven, the particularly famous Tiananmen Square, the thrill rides at Beijing Amusement Park, the White Dagoba Temple at Beihai Park, the Gate of Heavenly Peace next to Zhongshan Park, and the many plant collections at the beautiful Beijing Botanical Garden, where springtime cherry blossoms are amongst the highlights. More information about Beijing Tourist Attractions. 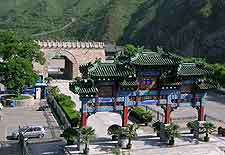 Much of Beijing is dominated by striking landmarks, both old and new. The most notable include the Great Hall of the People next to Tiananmen Square, the imposing Mao Zedong Mausoleum, the ancient 800-year-old Marco Polo Bridge, the ten-storey obelisk that is Beijing's Monument to the People's Heroes, and both the Gulou and Zhonglou towers, which are known for their musical past and bells. More information about Beijing Museums and Beijing Art Galleries.

History lovers and art aficionados staying in the tourist friendly city of Beijing will be pleased to find a host of cultural attractions. Look out for the China Science and Technology Museum, the historic information at the Great Wall Museum, the national treasures at the National Museum of China, the dinosaur exhibits at the Natural History Museum, the priceless art works at both Beijing's Palace Museum and National Art Museum of China, and the astronomical information at the prestigious Beijing Planetarium. More information about Beijing Landmarks. 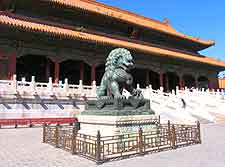 For many holiday makers and visitors to China, the city of Beijing contains enough tourist attractions to keep you entertained throughout your stay. However, others choose to explore the many surrounding sights outside of Beijing, with a popular stretch of the Great Wall of China being particularly notable. Also worth searching out are the nearby Eastern Qing Tombs, the Ming Tombs, the Jietai Temple, the Tanzhe Temple, and also the splendid marble Marco Polo Bridge, which is lined with almost 500 individually carved lions. More information about Beijing Attractions Nearby.