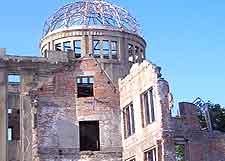 The one event most people know about the history of Hiroshima is its horrific 1945 atomic bomb attack, which ended WWII. However, the history of this famous Japanese city dates back centuries before the 'Little Boy' explosion.

Hiroshima successfully rebuilt itself during the following decades and now boasts as many neon signs and skyscrapers as any other modern Japanese city. Solemn reminders of the most famous and most devastating event in WWII history are found within its Peace Memorial Park.

After powerful military commander Mori Terumoto fled Koriyama Castle in 1589, he founded a new city called Hiroshima along the Seto Inland Sea coast. Terumoto constructed and moved into Hiroshima Castle by 1593, but soon found himself suffering at the hands of the Battle of Sekigahara, eventually losing this decisive battle. The battle's victor, Tokugawa Ieyasu, seized this city and most of Terumoto's other territories.

The castle standing in the city today is actually a replica of the original, which was badly damaged during the 1945 atomic bomb explosion. 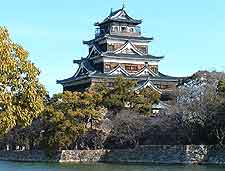 In 1619, Asano Nagaakira received control of the castle and its surrounding territory. Hiroshima grew, prospered, and lived in peace as the Hiroshima Domain capital during most of Asano's rule.

After the 1871 dismantling of the Japanese Han system, Hiroshima became the capital of its namesake prefecture and grew into a major urban centre during Japan's imperial era.

Hiroshima also became the location of one of the Japanese government's officially sanctioned English language schools, and the construction of Ujina Harbour helped the city become an increasingly important port. 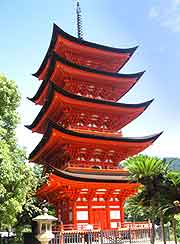 During the First Sino-Japanese War in 1894, Hiroshima became Japan's temporary national capital and the Sanyo Railway arrived in the city.

After the end of the First Sino-Japanese War, the city further expanded into a major cotton and military supplies producer, especially during the 1904 Russo-Japanese War and WWI.

This would later prove fatal in the history of Hiroshima. At the time, Ninoshima Island also became a site where WWI German prisoners of war were held. 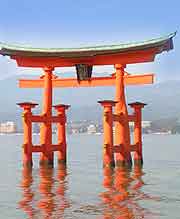 WWII and the Atom Bomb

Hiroshima was spared much of the air raid damage other Japanese cities endured during WWII, but its status as a major military supplier and shipper made it the target for the world's first atom bomb, on 6th August 1945.

The bomb immediately killed about 80,000 people, while a further estimated 60,000 people died from radiation sickness or injuries caused by the bomb.

The bomb also damaged nearly 70 percent of the city's structures and buildings. Within a week of the bombing, the Japanese had surrendered to the Allies, thus bringing an end to the war in the Pacific.

Like the oleander flower which became Hiroshima's official flower, the city successfully re-emerged in the years following the atom bomb explosion.

The Peace Memorial Park was established in the former Nakajima merchant district and the city served as a popular peace conference site. Hiroshima has now become a modern and peaceful city, welcoming its visitors with open arms.