Getting Around, Santa Barbara Travel, Transport and Car Rental 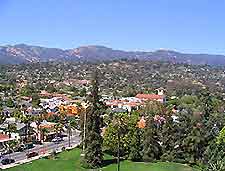 Travel and transport within Santa Barbara is made easy by the well organized MTD bus line and electric open-air shuttle services. As the city of Santa Barbara is located two hours north of Los Angeles and five hours south of San Diego, many visitors find that renting a car makes exploration and travel outside of Santa Barbara more convenient.

The local Santa Barbara Airport services several regional destinations. However, flights tend to be expensive and many people choose to fly into larger cities and rent a car, or travel by shuttle into Santa Barbara. Greyhound bus transport and Amtrak train services travel through Santa Barbara and are a scenic alternative for getting into and out of the city.

Address: 500 Fowler Road, Goleta / Santa Barbara, California CA, 93117, USA
Tel: +1 805 681 4803
The Santa Barbara Airport is a regional airport serving both commercial and private airplanes. Regional carriers and international express services travel to and from 10 major destinations throughout the US, including Dallas Fort Worth, Las Vegas, Seattle, Portland, Los Angeles, San Francisco, Phoenix, Denver, Salt Lake City and San Jose. Direct flights to Santa Barbara can be pricey and many visitors opt for flying into larger transport hubs like Los Angeles or San Francisco, from where shuttle services provide transport into the city. 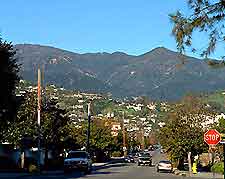 As California occupies such a vast area, many visitors to Santa Barbara find that renting a car makes exploration and general travel much more convenient and comfortable. Also, car travel in the Santa Barbara area is often cheaper than public transport alternatives. If you are planning to visit cities nearby Santa Barbara, like Los Angeles (a two-hour drive south), San Diego (a four-hour drive south) or San Francisco (a five-hour drive north), car hire is definitely a more convenient and inexpensive way to travel.

Highway 101 intersects the city of Santa Barbara and travels north and southbound along the coast to all major destinations. The route in either direction offers fantastic coastal scenery and views. Within Santa Barbara there are 13 city parking lots that are open 24 hours per day, offering 75 minutes of free parking.

Greyhound buses provides an extensive network throughout the United States offering relatively cheap transport, though travel is often slow and can be quite uncomfortable over long distances. The Greyhound bus depot is located at the corner of Carrillo and Chapala Street in downtown Santa Barbara.

The Santa Barbara Metropolitan Transit District (MTD) is a municipal bus system transporting passengers throughout the greater area, with bus stops located all over the city. Electric open air shuttle buses travel along Santa Barbara's State Street and the Downtown Waterfront stopping every 10 minutes, on each block from Sola Street to the Waterfront. This method of public travel is a cheap intercity alternative.

Amtrak runs the Coastal Starlight service which travels between Seattle, Washington and Los Angeles and the Pacific Surfliner operating along the coast of California from San Luis Obispo to San Diego. Trains make daily stops in Santa Barbara running both north and southbound. The station is located in downtown Santa Barbara at 209 State Street.

Taxi travel is readily available throughout the city, with half a dozen cab companies running 24 hour services. As Santa Barbara is home to a few large universities, taxis tend to congregate around entertainment venues during the night, as well as at tourist destinations throughout the day.