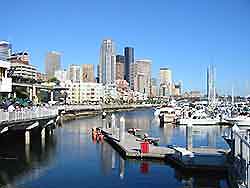 The city of Seattle, Washington (WA), is an appealing tourist destination for overseas visitors and Americans alike, and the skyline is easily recognisable by the Space Needle. Home to the world-famous Starbucks coffee shops, which first opened in 1971 in Pike Place Market, Seattle lies between Lake Washington and the Puget Sound waters, with snowcapped-mountains to the west.

Seattle is a particularly beautiful city, actively promoting tourism. With many small friendly neighborhoods, combined with modern shopping centers, waterfront restaurants and magnificent skyscrapers, the city has much to offer tourists and visitors, and many television series and films have been based here over the years, including 'Frasier' and the 1993 Hollywood blockbuster 'Sleepless in Seattle', starring Tom Hanks and Meg Ryan.

For current tourist information in the city, the Washington State Convention and Trade Center on 7th Avenue and Pike Street is the place to come. Encompassing Cherry Street and South King Street, Pioneer Square is an especially historic and appealing part of the downtown district, while to the north is Seattle Center and the city's principal sporting facilities. Those looking for the best selection of shops should head to 4th Avenue and 5th Avenue, from Olive Way. Waterfront streetcars regularly ply the Alaskan Way, which serves as the city's main thoroughfare.

Hotels in Seattle are widespread, being suitable for both business travelers and tourists staying in Seattle. Spreading out from the city center to numerous surrounding districts, many of the city's hotels offer impressive waterfront views and easy access to attractions, being most plentiful around downtown, Belltown and Pike Place Market. A selection of hotels can also be found close to the Seattle-Tacoma International Airport (SEA), lying to the south and within the neighboring city of SeaTac. More information about Seattle Hotels. 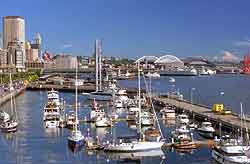 Seattle contains many world-class tourist attractions, including the city's breathtaking waterfront - featuring a host of maritime industries, seafood restaurants and shops along the piers; the Seattle Center - a large cultural center with a popular amusement park; the Pike Place Market - with hundreds of shops selling local produce and freshly-caught seafood; Discovery Park - the largest park in Seattle, overlooking the Puget Sound; and the Washington Park Arboretum - with more than 5,500 plant species and home to a vast Japanese maple collection.

Other popular attractions in Seattle include the Space Needle - one of the most iconic landmarks in Washington, built for the 1962 World Fair; the Smith Tower - dating back to 1914, with panoramic views of downtown; the Boeing Factory - with regular tours showing the famous Boeing airplanes in production; the Fisherman's Terminal - containing a number of piers in the Queen Anne district; the Safeco Field - the stunning new home of the Seattle Mariners Baseball; and Saint James Cathedral - situated in the First Hill area, overlooking the cityscape. More information about Seattle Tourist Attractions and Seattle Landmarks. 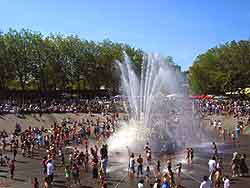 Tourist attractions located close to Seattle include the Tillicum Indian Village - situated on Blake Island; Tacoma - a frequent day trip destination; the Mount Rainier National Park - an active snowcapped volcano; Mount St. Helens - a striking natural Washington monument with a large volcanic crater; the Snoqualmie Falls - nestled in the foothills of the Cascades; the Bainbridge and Bremerton Islands across the waters of the Puget Sound; Victoria - the capital of British Columbia, Canada, with notable architecture and a rich history; and whale watching - a popular activity in spring, summer and fall, around the San Juan Islands.

Seattle also contains many top museums, such as the acclaimed Burke Museum of Natural History and Culture - a unique state museum filled with historic information about this popular Washington city. Other cultural highlights include the Experience Music Project Museum (EMP) - featuring stunning architecture and rock 'n' roll memorabilia; the Museum of Flight - with many enormous aircraft and spacecraft; the Science Fiction Museum and Hall of Fame - the only museum in USA dedicated to science fiction; the Seattle Art Museum (SAM) - home to more than 21,000 items including paintings, sculptures and art work from all over the world; and the Henry Art Gallery - a renowned museum housing modern and contemporary arts. More information about Seattle Museums and Seattle Art Galleries.