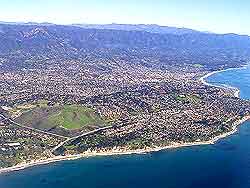 The city of Santa Barbara is the county seat and can be found in the sunshine state of California (CA). Santa Barbara lies on the coast of the Pacific Ocean, close to the Santa Ynez Mountains, and this area is known as the American Riviera. The city offers many major seaside attractions, including sandy beaches lined with palm trees, such as Arroyo Burro Beach, Hendry's Beach and East Beach.

Other major tourist highlights in Santa Barbara are located around State Street, the main thoroughfare, which is full of restaurants, bars, cultural museums, nightclubs and other entertainment options. This Californian city also offers oceanfront pathways and trails, fishing trips and excursions, and a number of historical buildings, such as the striking 1786 Santa Barbara Mission at Laguna.

Santa Barbara is a popular tourist destination in California and is home to a large selection of hotels, suiting all budgets. Many hotels are concentrated in the city center and also along State Street, Castillo Street, West Montecito Street, West Cabrillo Boulevard, Bath Street and Channel Drive. Those wishing to stay in the very heart of downtown or next to the beachfront should expect to pay a premium for accommodation. Further hotels can be found close to the nearby Santa Barbara Municipal Airport. More information about Santa Barbara Hotels. 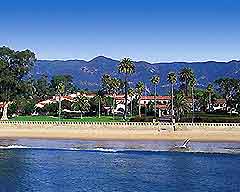 The sunny, coastal location ensures that the city's tourism industry continues to thrive. If you are in need of tourist information, then you will find two visitor centers of note, located on Garden Street and Harbor Way. The city's main tourist district can be found around State Street, which is bordered by beaches and lined with cafés, shopping plazas, restaurants and bars.

This enticing Californian city offers many popular tourist attractions, including the El Presidio de Santa Barbara - dating back to 1782 and containing the city's oldest building; the Santa Barbara Zoological Gardens - regarded as one of the most outstanding small zoos in the USA, with all of the usual animal favorites; the Lobero Theater - a historical theater, offering a host of events, performances and concerts; the Santa Barbara Winery - producing many notable local labels with guided tours, wine information and tastings; State Street - the heart and soul of the city, with miles of boutiques, plazas, cafés and more; and Stearns Wharf - dating back to the 1870s, known for being the longest deep water pier in the area. 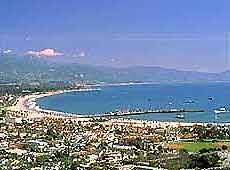 Other major tourist attractions here include the Channel Islands - close to the southern California coastline, stretching between Santa Barbara and Los Angeles; Montecito Inn - a famous luxurious hotel dating back to 1928, commissioned by Charlie Chaplin; the Santa Barbara County Courthouse - an eye-catching Spanish Colonial style building, with sunken gardens; the Botanic Gardens - located in the Mission Canyon, with around 1,000 species of native and exotic plants; and a number of other gardens and parks, such as the Chase Palm Park, the Franceschi Park, Lake Los Carneros, the Mission Rose Garden and the Shoreline Park. More information about Santa Barbara Tourist Attractions and Santa Barbara Landmarks.

Tourist attractions within easy reach of Santa Barbara include the Chumash Painted Cave State Historic Park - with a fascinating sandstone cave covered in ancient drawings; the Gainey Vineyard - featuring vineyard gardens and a Spanish-style tasting room; the Santa Barbara Channel - offering magnificent views of the Santa Ynez Mountains, with a host of nearby marine life, often including whales and dolphins; the Seven Falls - stunning waterfalls and swimming holes, standing in Los Padres National Forest; Solvang - America's Danish capital, regarded as one of the most picturesque small towns in western USA; and the Stow House and Railroad Museum - standing in scenic parkland near to Santa Barbara, containing period furnishings and antique railroad artifacts. More information about Santa Barbara Attractions Nearby.