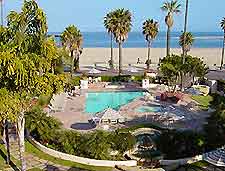 Although it is fair to say that Santa Barbara has never really been known for its cheap hotels and budget accommodation, there is some inexpensive lodging in the city if you know where to look. However, much of this comes in the form of motels on the outskirts of Santa Barbara, which are usually a fair distance from the downtown district and beaches.

Holiday makers may find it more affordable to stay just outside of Santa Barbara, with accommodation being readily available along the California Riviera and noticeably cheaper in nearby Carpinteria, Goleta, Oxnard, San Buenaventura and Summerland. Although hardly cheap, the lights of Los Angeles often beckon and hotels in LA suburbs such as Beverly Hills, Malibu and Santa Monica are less than a 90-minute drive away. Of note, some hotels in this part of Southern California do choose to offer discounts during the winter season. 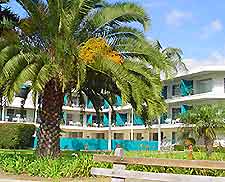 If you are looking for budget accommodation in Santa Barbara, then expect it to be basic and well away from the action. Many quite reasonable hotels are grouped on State Street, which lies on the northerly outskirts and close to Las Positas Road, being well connected by local public transport.

There is also a selection of budget hotels concentrated around West Montecito Street, the Coastal Village and Castillo Street, where the Days Inn is a reasonable bet, offering two-star lodging just a stroll from the scenic Yacht Harbor, Pershing Park and the Santa Barbara City College. Close by and on the West Cabrillo Boulevard, the Best Western Beachside Inn is a notable hotel, standing just across from the beachfront and near to the popular Los Banos del Mar Swimming Pool, the Santa Barbara Sailing Center and the Shoreline Drive. 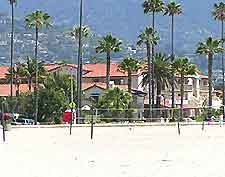 Sited on the East Cabrillo Boulevard, the recommended three-star Santa Barbara Inn is an appealing boutique-style hotel and stands right next to the East Beach, where it boasts splendid views of the Pacific Ocean. Many attractions stand within reach of this particular hotel, such as the Milpitas Shopping Center, the Montecito Country Club and the Santa Barbara Zoological Gardens.

Also located on the East Cabrillo Boulevard, although rather more expensive, is the Fess Parker's DoubleTree Resort, near to Chase Palm Park. If money is no object and luxury accommodation is everything, then a handful of five-star hotels really do stand out in Santa Barbara. These include the Four Seasons Resort (The Biltmore) on Channel Drive, the Simpson House Inn on East Arrellaga Street, and the San Ysidro Ranch (A Rosewood Resort) on San Ysidro Lane, which interestingly is actually where Laurence Olivier and Vivien Leigh once exchanged their wedding vows.