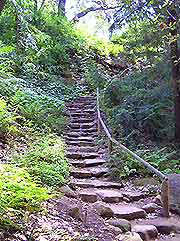 The superb climate of coastal Santa Barbara has attracted inhabitants for 13,000 years, although it wasn't until the 18th century that the first Europeans arrived and established a colony.

When the town fell into America's hands, the history of Santa Barbara quickly transformed it into a gold rush haven, a health spa retreat, an oil boomtown, a WWII military town and finally, the classy travel destination it is today.

Hoping to save the souls of the Chumash Native Americans who had lived in the region for 13,000 years, Spanish explorers and missionaries established the first outpost here in 1769. The Santa Barbara Presidio was built in 1782, having the distinction as the last Spanish military outpost constructed in the New World.


Today, it is one of the city's top attractions, reflecting the history with its museum and archaeological site. Several years later, in 1786, the Mission Santa Barbara was opened, which remains the finest surviving mission among California's sites.

In 1822, Spain lost its Californian territories to Mexico and the settlement shifted its focus from military activities to cattle-raising. A collection of small villages, centered around the Presidio, formed the foundations of the city as we know it today. Remnants of these original buildings, such as the Covarrubias Adobe, can be viewed at the Santa Barbara Historical Society.

When Mexico lost control of its American territories to the United States in 1848, Santa Barbara was swept up in the California Gold Rush fever. The town became a rowdy, violent outpost regarded as one of the most lawless places in the country. This dark period came to an end in the late 1800s, when the history of Santa Barbara took a turn for the better.

By the turn of the century, the city was connected to California's larger cities by rail and road. When oil was discovered in the area at the same time, the economy boomed for a couple of decades, helping to turn the city into the wealthy enclave it is today. Stearns Wharf was opened in 1872, increasing Santa Barbara's accessibility for tourism and commercial activity.

Long before Hollywood existed, Santa Barbara was the epicenter of the American silent film industry, producing 1,200 films between 1910 and 1922. The prestige the film industry brought sparked a city revitalization movement, which was centered around the concept of unifying the architecture in the style of its Spanish colonial roots. The Lobero Theater and the Santa Barbara Natural History Museum are both housed in classic examples of this vision.

During WWII, Santa Barbara underwent a major change as the US military moved into Goleta Point to prevent Japanese submarines from attacking the coast. The Vandenberg Air Force Base still contributes in part to the local economy, as does the University of California campus.

Santa Barbara's present history is a diverse mix of military, students and residents. The city is a popular weekend destination for Los Angeles residents escaping their city's sprawl, and for anyone else who can afford to stay in this expensive but beautiful place. A pleasant Mediterranean climate, upscale amenities and a beautiful offering of beaches and mountains combine to create one of America's finest travel destinations.