Located in the southerly portion of California and alongside the Pacific coast, the city of Santa Barbara is just over two hours away from both Los Angeles and Santa Monica. Santa Barbara is to be found within the county of the same name, where it serves as the county seat, although Santa Maria is actually the county's biggest city.

The city's coastal setting offers some spectacular scenery and beaches, while the inland Santa Ynez Mountains provide an impressive backdrop with their peaks of more than 1,200 metres / 3,940 feet.

Following a severe earthquake in 1925, much of the city center was damaged and destroyed. Rebuilding work followed soon after the debris was cleared, with buildings being strongly influenced by traditional Spanish Colonial Revival designs. This style of architecture is still clearly visible today, meaning that Santa Barbara boasts an interesting and rather distinctive character.

Maps of the city are available at the Santa Barbara Visitors Center, which is located on the corner of Garden Street and the East Cabrillo Boulevard, being close to the Casa Las Palmas and featuring its very own car park.

From here, the Stearns Wharf is less than ten minutes away by foot, via the West Cabrillo Boulevard, known for its numerous eateries. 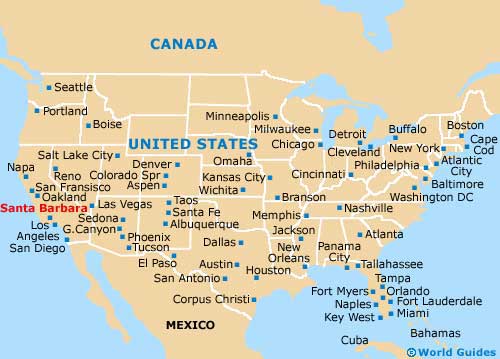