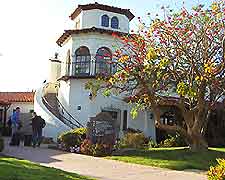 Santa Barbara Airport serves around one million travelers each year, with a number of airlines traveling to and from many major US cities, including Denver, Dallas, Las Vegas, Los Angeles, Portland, Phoenix, Seattle, San Francisco, San Jose and Salt Lake City.

Address: 500 Fowler Road, Goleta / Santa Barbara, California CA, 93117, USA
Tel: +1 805 681 4803
Santa Barbara Airport stands just 7 miles / 11 km to the west of the city center, being right next to the Goleta Beach Country Park and the University of California campus. The Twin Lakes Golf Course is just a short distance away and serves as a useful point of reference, as does the Lake Los Cameros Park.

Santa Barbara Airport is within easy driving distance of the city center, with the car journey lasting around 15 minutes. Major roads nearby include Sandspit Road and Fairview Avenue, which lead to Highway US-217 and Highway US-101.

Door-to-door shuttle buses are operated by a number of different travel companies, such as Central Coast Shuttles, Super Ride and Road Runner. These shuttles travel throughout the Santa Barbara area and around nearby Santa Maria and Ventura County.