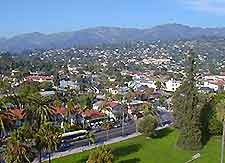 Santa Barbara has long been known as the American Riviera, with unsurpassed coastal beauty, historical districts and a rich Spanish and Mexican influence. A relatively small city, Santa Barbara has a population of just over 100,000 people, although there are a variety of major cultural attractions and landmarks throughout the city's main districts and neighborhoods.

Many of the top tourist destinations in Santa Barbara are located in and around State Street in the downtown district, which parallels the ocean and is bisected by the famous Stearns Wharf. Here are Santa Barbara's main districts, neighborhoods and locations. 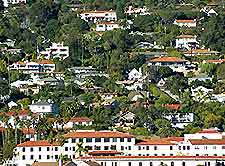 State Street is the heart of the city, centrally located in the downtown district of Santa Barbara. The pedestrian strewn street is lined with open air cafés, shopping plazas, art galleries, designer boutiques, bars, restaurants and beautifully tiled courtyards. Santa Barbara's State Street is bordered by beaches on both sides with East Beach attracting mostly teenagers and college students, while West Beach offers whale watching cruises from the harbor and is known as one of the best locations to watch beautiful California sunsets. Containing historic sites such as the Botanic Gardens, Santa Barbara Mission, County Courthouse and Stearns Wharf, this is one of Santa Barbara's most entertaining and beautiful districts. 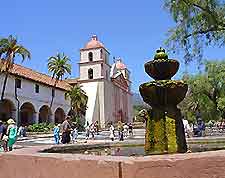 Mission Canyon is bordered to the south by Mission Street and is known locally as 'Mission District'. The famous Santa Barbara Mission is located in this neighborhood along with other historical relics and landmarks.

The Samarkand adopted its name from a 1920s Persian style hotel which dominated the elevated neighborhood. Now encompassing Oak Park and the pedestrian friendly De La Vina Street, the Samarkand is a charming area.

Located adjacent to downtown, this is an older and more elegant neighborhood of Santa Barbara with beautiful turn of the century residences.

The Westside, once all farmland, is the city's most densely populated neighborhood stretching from West Beach inland to the Goleta Valley.