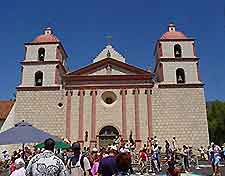 Santa Barbara celebrates the customs and traditions of its diverse population with annual festivals, exciting events, seasonal activities and a host of things to do throughout the year.

Many of Santa Barbara's largest events are hosted outdoors in Oak Park or along the beachfront, as well as on State Street, and are marked by a lively atmosphere, local foods, wine tastings, music and dance.