Santa Barbara Weather, When to Go and Climate Information 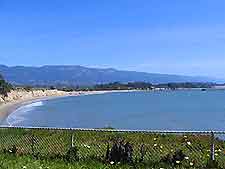 Summer weather in Santa Barbara is warm and dry, but June may suffer with early morning fog along the coast, locally know as the 'June Gloom', which usually disappears by midday. Visitors to Santa Barbara will find that the months of July, August and September are the hottest months of the year with temperatures averaging around 75°F / 24°C, although higher temperatures may occur.


The Santa Barbara weather and climate during the winter months is wetter and cooler, and in January and February temperatures drop to around 55°F / 13°C. Santa Barbara's average annual rainfall is around 38 cm / 15 inches.


The following are the normal daily temperature ranges for Santa Barbara: