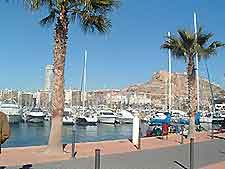 In 2011, Spain's sixth-busiest airport opened a new terminal, which is officially called Terminal N. Its size is actually six times as large as the combined size of the two terminals being replaced. Terminal N contains some 16 baggage carousels, 40 gates and nearly 100 individual check-in counters.

Most of the planes flying into Alicante Airport are charter flights, being filled with passengers headed for holidays in Spain's seaside Costa Blanca region. Two major motorways stand nearby and transport arriving passengers to the nearby coastline of the Mediterranean Sea.

Address: 03071 Highway A7, Alicante, Spain
Tel: +34 96 691 9000
Ancient Alicante's historic heart stands only 9 km / 6 miles south-west of the airport. Located next to the city of Elx (Elche) and alongside the suburb of El Altet, the facility's maximum annual passenger capacity is now 20 million, thanks to the opening of its new Terminal N, and so an increase in overall passenger volume is expected.

Alicante Airport stands near two busy motorways, the A7 and the N332. All eight of the resident car hire companies can be found adjacent to the Arrivals area's Baggage Claim. Reserving vehicles in advance is highly recommended, especially during the Costa Blanca's busy summer season.

The official taxis based onsite are white and collect passengers from outside the terminal building. Of note, the drive from the airport to Alicante takes around 20 minutes.

Shuttle bus services are included in most package holidays and connect the principal local hotels. Buses travel between Alicante's newly constructed central bus station and the airport once every hour, per day. Further buses also depart from the grounds and head to both Murcia San Javier Airport and Benidorm, while Valencia, Granada and Barcelona can all be reached via the Automóviles Luarca S.A. (ALSA) bus lines.

The airport's new terminal has reserved spaces for tram and rail stations. Until these stations are completed, visitors must board commuter trains at Alicante, with services to Murcia and other surrounding Costa Blanca communities being available. From Alicante, RENFE trains take less than five hours to reach Barcelona and under four hours to reach Madrid.