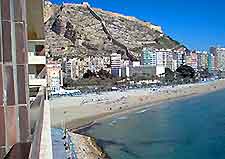 Plenty of hotels and accommodation options are on offer year-round in Alicante, although during the busy months of July and August, hotels in Alicante can quickly become fully booked. Advance reservations are always sensible when staying in Alicante, to ensure that you are able to stay at your preferred hotel, with lodging in Alicante often cheaper at the weekends.

The price of hotels in Alicante is always a good indication of both the accommodation and facilities available, together with the location of the hotel in relation to the city centre, with many of the cheapest hotels in the Alicante area standing on the city's outskirts and close to Alicante's nearby airport. 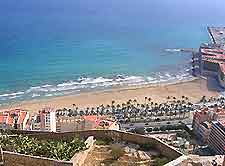 With an enviable coastal destination along Spain's famous Costa Blanca, the most popular hotels in Alicante line the beautiful seafront, standing close to the sandy beaches and offering superb views of the Mediterranean Sea. The Plaza Puerta del Mer on the Alicante coastline contains a number of hotels, which overlook both the beach and marina, offering hundreds of hotel rooms.

Many of Alicante's most popular hotels can be found at the lower part of the city's Old Town district and above the tiled promenade known locally as the Explanada de Espana. Further hotels in Alicante are located along the Calle San Francisco and Calle San Fernanda, both of which are well-placed for exploration of the area. Alicante's Calle de Villavieja, Calle del Portugal and Calle del Pintor Lorenzo Casanova also offer clusters of acommodation options, with a good selection of reasonably priced hotels to choose from. 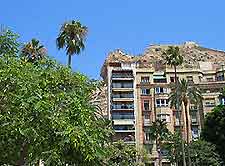 A number of luxury hotels are available in Alicante, including the magnificent Hotel Mediterranean Plaza, which is a stunning converted 18th-century mansion, located on the Plaza del Ayuntamiento, opposite the Town Hall. For those looking for cheap hotels and budget lodging, a number of camping sites along the Alicanta coast are extremely popular, particularly El Molino on the San Juan beach, which can be easily reached by bus. Also, Camping Costa Blanca is situated around 10 km/ 6 miles north of Alicante, although a train line is nearby.

Further budget accommodation exists at the Albergue Juvenil La Florida, which can be found around 2 km / 1 mile to the west of central Alicante. Although usually a student residence, the halls operate as a cheap youth hostel between the months of July and mid-September, with plenty of inidividual rooms offers an appealing alternative to Alicante's more mainsteam hotels.