Getting Around, Alicante Travel, Transport and Car Rental 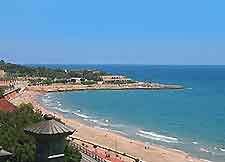 The transport infrastructure in the city of Alicante is well laid out, with a good selection of travel options available. Bus transport is particularly inexpensive and long-distance buses connect Alicante with a number of central cities and coastal resorts along Spain's Mediterranean coastline.

Other modes of public transport in the Alicante area include train travel from the 'RENFE Estación de Madrid' rail station, numerous taxis around the city, and regular ferries which travel to Algeria. Just a short distance from the city centre, Alicante Airport (ALC) has long been a major gateway to this part of Spain and is busy throughout the year, particularly during the summer months. With a well-pedestrianised centre, much of Alicante is easy to travel around and navigate on foot, especially along the spectacular Explanada de Espana promenade.

Address: 03071 Highway A7, Alicante, Spain
Tel: +34 96 691 9000
Alicante Airport (ALC) stands around 9 km / 6 miles to the southwest of central Alicante and offers a range of ground transport, providing a number of different ways to travel into the nearby city centre. Transport at the airport includes regular scheduled buses, hotel shuttles and organised taxi ranks. Alicante Airport (ALC) can be reached along the N-340 / N-332 and was originally known as El Altet Airport. Serving nearly ten million passengers each year, Alicante Airport is a major gateway to the Costa Blanca region of Spain. 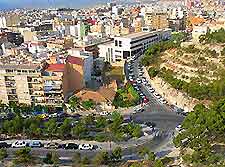 A selection of car hire transport companies are available at Alicante Airport (ALC), providing both a useful way to travel into the city and explore the surrounding area. Car rental firms at the airport include Avis, Atesa, Europcar, Hertz, Sol-Mar and Record Rent a Car. Many major roads surround the city of Alicante, including the N-340, N-330, N-332 A-31, A-77 and A70. The Calle Gran Via, Rambla de Méndez Núnez, and Calle Colombia are major thoroughfares in the city and are particularly busy during peak hours, although congestion is generally quick to clear.

Tel: +34 96 513 0700
Regular buses travel from Alicante's main bus station along the Calle Portugal, together with long-distance buses and coaches. Over ten motorway buses travel to and from Alicante bus station, with daily long-distance buses reaching Valencia city in around two and a half hours, and Madrid in just four and a half hours. Buses from Alicante also travel to a number of coastal towns and cities, including Benidorm (one hour).

Alicante trams (Tram Alicant) operate throughout the day and link the Plaza del Mar to the Playa del Postiguet. The modern trams travel on two separate lines, with both running to Alicante's train station.

The city's main train station is known as the 'RENFE Estación de Madrid' and can be found along the Avenida Salamanca. Alicante's train station provides regular train transport to many major cities across Spain, including Murcia (one and a half hours), Valencia (less than two hours), Madrid (less than four hours) and Barcelona (around four and a half hours). Trains running on the Alicante FGV line depart at the end of the Playa del Postiguet and travel to a number of coastal resorts, including both Benidorm and Denia.

Tel: +34 96 514 7010
Regular ferries travel to the city of Oran in Algeria, across the Mediterranean Sea. Operated by Romeu, the main ferry ticket office is located at the Puerto Maritimo.

Tel: +34 96 591 0591
Taxis are one of the most convenient methods of transport in the city, with a number of taxi ranks being available in both central Alicante and at the airport. Most taxis can also be hailed from the street or booked in advance by phone.