Standing in the Valencia and Murcia region of Spain, the cosmopolitan city of Alicante is full of things to see and do, with much of Alicante being separated into distinct neighbourhoods and districts. The Old Quarter of Alicante, otherwise known as 'El Barrio', is a lively part of the city and home to many of Alicante's most historic attractions and landmarks, together with a wealth of shops, restaurants and popular Tapas bars.

Nearby, the central La Zona district of Alicante is located behind the famous Explanada de Espana promenade and is a particularly animated spot, known throughout Alicante for its nightlife and entertainment venues. Alicante's nearby El Puerto district, which is centered around the marina, also features a cluster of popular nightclubs and bars. No trip to Alicante is complete without visiting the city's beaches, with the Playa del Postiguet being the city's most popular beach. Here are Alicante's main districts, neighborhoods and locations. 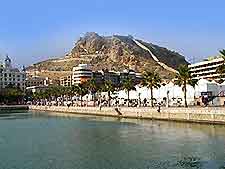 Much of Alicante life is centred in the historic Old Quarter, known locally as El Barrio, located around the slopes of Mount Benacantil and beneath the famous Castillo de Santa Bárbara. This prominent district is bordered by the Rambla de Méndez Núnez, the main north / south thoroughfare, which is lined with palm trees and known for its endless shopping opportunities. The street features a popular local market, together with Alicante's main train and bus stations at the western end. The Old Quarter of Alicante contains a labyrinth of narrow alleyways and streets, with many colourful painted buildings and a superb selection of top restaurants and lively Tapas bars, popular with both locals and visitors in Alicante.

Notable places of interest in Alicante's El Barrio neighbourhood include the Plaza de la Santisima Faz, which is situated behind the Town Hall (Ayuntamiento). Nearby, the historic street of Calle San Agustin leads to the Plaza Quijano, a particularly historic part of Alicante. Perhaps one of the area's most prominent landmarks, the 17th-century Cathedral of St. Nicholas of Bari (Catedral de San Nicolás de Bari) stands on the Plaza Abad Penalva and dominates much of the Alicante Old Quarter, with a magnificent Renaissance-style façade and a large dome.

Situated behind the Explanada de Espana and around the Avenida de Ramón is Alicante's La Zona district, a particularly exciting part of the city. Notable streets in the La Zona district of Alicante include the Calle Alemania, Calle Canalejas and the Calle San Fernando, where you will find a high concentration of bars and night clubs. This part of Alicante is known for its exceptional nightlife, with a host of trendy spots and a definite party atmosphere.

Based around the marina, the El Puerto district of Alicante is a particularly vibrant spot, known for its nightlife. Many of the bars in this area stay open late at the weekends, closing during the early hours of the morning, which can be as late as 07:00. Bars and clubs in Alicante's El Puerto district regularly play Latin and salsa music, with large dance floors. An important part of this region, the Plaza del Puerto Viejo is surrounded by an array of shops, bars and restaurants, often featuring notable Alicante festivals and concerts during the summer months. Nearby, the enormous Panoramis Complex is a major 24-hour shopping mall, complete with multi-screen cinema complex and restaurants.

A number of spectacular beaches can be found along Alicante's Mediterranean coastline, with good connections to the city by regular buses and trains. Alicante's main beach is the Playa del Postiguet, which can be busy during the high season. However, just 6 km / 4 km from Alicante you will find the quieter beaches of San Juan de Alicante, which offer excellent facilities, including plenty of nearby shops and bars. Around 12 km / 7 miles to the south of Alicante, the Playa Arenales beach is a particularly appealing spot, with large sand dunes and plenty of space. Day trips to the nearby island of Tabarca are also equally enticing, with regular boats departing throughout the year from the Explanada de Espana.