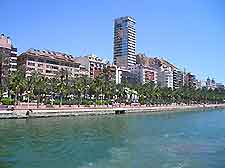 Alicante is famous for being the biggest city in the whole of the Costa Blanca area and supports both a thriving tourism trade and transport infrastructure, including a busy airport with many reliable forms of travel options available. The city of Alicante offers everything that you could need, including an endless selection of hotels, restaurants, bars, castles, palaces and religious buildings, together with many impressive white sandy beaches, such as the San Juan Beach, which is connected to central Alicante by a regular electric streetcar.

Much of city life is centred around Alicante's beachfront, which is edged by a long promenade, known locally as the Explanada de Espana. Offering superb coastal views, this walkway leads to the main harbour area and is lined with shops and bars along the way.

The city of Alicante offers a number of useful tourist information bureaus, where you will find a range of travel tips, attractions leaflets, bus timetables and events listings. The main tourist outlet in Alicante is located along the Rambla de Méndez Núnez, which contains a wealth of up-to-date tourism information. Further tourist bureaus and kiosks can be found at both the bus and train stations, close to the beaches and on the Plaza del Portal de Elche. 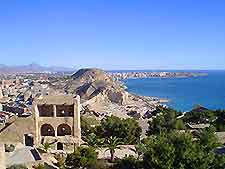 Spanish is the third most widely spoken language in the world, behind Chinese and English. Although Spanish is the main language in Alicante, English, French and German are often understood at most attractions, museums, hotels and restaurants that cater for visitors. Castilian Spanish is the official language here, although in the nearby regions, Basque, Catalan and Galician Spanish may be spoken. For day trips outside of Alicante, a phrase book can prove invaluable and help with both translation and communication.

Tipping is quite discretionary in Alicante, with taxi drivers often being pleased to receive a tip 5% or thereabouts, although this is by no means necessary. Restaurants always include service charges by law and these should be stated on the menus, although a tip will still be expected and very much appreciated. Hotel staff, such as luggage handlers, happily accept a small tip of just one Euro - or more. Generally, no other public service workers in Alicante expect to receive tips. You should always pay tips in cash, so that you can guarantee that the person it is intended for receives it fully. 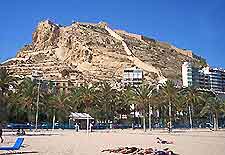 The national religion of Alicante and throughout Spain is Roman Catholic, although many other faiths and major religions are also represented in Alicante, including Protestants and Muslims. The city contains an impressive selection of churches and historic religious buildings that welcome visitors and these hold regular parish services on most days, particularly at the weekends. Alicante's most important church is the Cathedral of St. Nicholas of Bari (Catedral de San Nicolás de Bari), which is known for its beautiful Renaissance-style architecture.

In many buildings and on public transport in Alicante, rules now restrict smoking and this is strictly enforced, with harsh fines and penalties. No-smoking symbols are usually clearly displayed and as from 2006, Spanish legislation makes it illegal to smoke in offices, places serving food, and children's venues, unless separate smoking areas are designated. Many smokers visiting Alicante choose to smoke outdoors, in al fresco dining areas and in separate smoking rooms. When smoking in Alicante, be sensitive to others and choose a place to smoke away from non-smokers, preferably where others are already smoking.

One of the main threats to personal belongings in Alicante are pickpockets and bag snatchers, so always be aware of your hand baggage, wearing bags across your body and if possible, use a discreet money belt or zippable bag. Also, be sure not to leave valuables in parked cars and hotel rooms.

VAT (IVA) is always included in the price and refunds are unusual in Alicante and throughout Spain. Tourists visiting the region from countries outside of the EU are only able to claim tax refunds where the item was purchased for personal use and cost more than a certain amount. Shopkeepers in Alicante can provide further details.