The Spanish capital of Madrid is an epic and enormous city, boasting a population exceeding three million people, and rising. Enjoying a strategic position in the core of Spain, within the autonomous community - Comunidad de Madrid, this city is well connected to the whole of Spain by a series of major roads - all roads lead here!

Forming the very heart of the city is the Puerta del Sol, which many people refer to as simply being 'kilometre zero'. From this point, Madrid's principal thoroughfares head outwards and connect all of the main sights and places of interest, such as the Plaza Mayor (south), the bustling Huertas area (south-east), the Gran Via (north), Chueca (north) and the Palacio Real (east)

Madrid can be a chaotic and extremely busy city, with various ring roads skirting the outskirts of the city. These highways are the best way to reach the outlying Comunidad de Madrid region, with maps and a little patience being strongly advised. 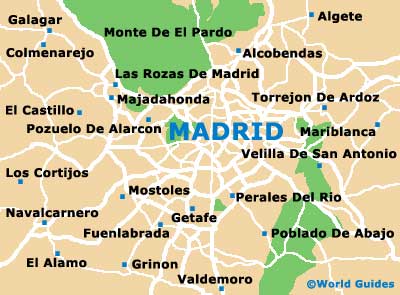