Spain has produced sportsmen and women of championship standard in a variety of sports, such as cycling (Induráin), golf (Ballesteros and Olazábal), tennis (Sánchez Vicario) and many others. This has resulted in a rapid expansion of facilities for spectators and participants.

Between March and June it is possible to watch championship events in a variety of sports including cycling, tennis and soccer.

Soccer is Spain's number one spectator sport. Approximately 300,000 fans watch the Primera División (First Division) at weekends during the season between September and May. Madrid's two premier teams are Real and Atlético Madrid and there is immense rivalry between the clubs.

Real Madrid, whose stadium can accommodate over 90,000 spectators, is the traditionally more successful, having lifted the European Cup on seven occasions. The club's museum commemorated its 100th anniversary in 2002. The Real players are celebrities throughout Spain and one Real member who has international notoriety is David Beckham.

Admission: tickets can be purchased at the clubs on the day of the game although booking in advance for the bigger matches is recommended. Advance tickets may be obtained either from the stadiums or a more expensive option is via ticket offices near Puerta del Sol on Calle de la Victoria.
Open hours: museum - Tuesday to Sunday 10:30 to 19:30, on match days closure is two hours before the game 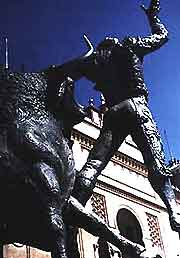 Madrid is the international capital of bullfighting with the Plaza de Toros Monumental de Las Ventas being the biggest ring in the bullfighting world, seating 23,000 spectators. A fight begins with the matador meeting the bull, assessing his size and using the red and yellow capote (cape) to wear the beast out. This then leads into the first of three sections of the fight. During the first tercio (third) the picador, mounted on a horse, lances the bull's withers, an act to annoy and weaken the animal. Banderillos then proceed to thrust long darts into the bull, once again in the shoulder region, in the course of the second tercio. The final tercio sees the return of the matador to put the highly agitated animal through some passes before it is eventually killed.

Admission: ticket prices vary according to the position around the ring, starting with the basic Sol seat (in the sun) to the more comfortable Sombre seats (in the shade). Tickets can be purchased from the rings, via the ticket offices on Calle de la Victoria or from other sites selling theatre tickets. Although Sol seats may occasionally be purchased on the day of a fight, booking in advance is recommended and even a prerequisite during Feria de San Isidro.
Open hours: corridas (fights) are usually on Sunday afternoons thoughout the summer. However, the best and most important bullfighting season begins in mid-May and hosts fights every day for a fortnight.

The day race season runs from February to June and mid-September to early December. During the summer races are held at the Hipódromo La Zarzuela starting around midnight to 02:00.

A Basque ball game played at speed on which spectators bet. Also known as jai-alai, Pelota has developed from handball and is played on an enclosed court called a frontón. The traditional form of the game is played with a bare hand.


There are an enormous amount of sports available to visitors in the city of Madrid and being only minutes away from open countryside, it has many activities to tempt all lovers of the outdoors. Throughout Madrid there are amenities to participate in a large range of sports including tennis, polo, squash, swimming, bowling and horse riding. For further information on activities and facilities contact 'Instituto Municipal de Deportes' located at Palacete de la Casa de Campo, Fuente del Rey, Tel: +34 91 464 90 50.

Address: located on Carretera de Castilla
Tel: +34 91 207 03 95
This club includes tennis courts and stables, with horses for hire and a golf course.

Several golf clubs in the Madrid vicinity are open year round and for a fee, entry is available to non-members. A pamphlet entitled 'Golf in Spain' is available through the Federación Española de Golf, Capitán Haya 9, Madrid.

Several public indoor and outdoor swimming pools can be found around the city. Outdoor pools operate between June and September.

Spanish wild goats can be stalked near Ávila at the Gredos National Preserve by arrangement, whilst red partridge can be found closer to Madrid. For further information contact the Federación Española de Caza, Calle de la Princesa, 24. Details about fishing can be obtained from the Federación Española de Pesca, Calle Navas de Tolosa, 3, but visitors interested in fishing may like to know that the rivers near Madrid contain black bass, carp, pike and trout.

Permits for either sport may be attained from I.C.O.N.A., Calle de Jorge Juan, 39.

Navacerrada , the most modern of the resorts in the Sierra de Guadarrama, is also the nearest to Madrid being 37 miles / 60 km north of the city. The skiing season runs from December to April, further information about winter sport can be acquired from the Federación Española Deportes de Invierno on Calle de Claudio Coello, 32.

The Federación Castellana de Esquí Náutico, San Andrés, 36, Tel: +34 91 270 67 31, will provide details about sailing and waterskiing facilities on the reservoirs within the Comunidad de Madrid.