There are over 200 churches to be found in Madrid. 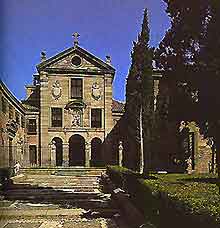 Address: Plaza de la Encarnación, 1
Tel: +34 91 542 00 59
Built on the directive of Felipe III's wife, Empress Margarita de Austria, the Monasterio de la Encarnación, begun in 1611, was designed by Juan Gómez de Morain. However, a fire in 1734 destroyed the church, which was then rebuilt in the 1760s in a classical-baroque style by Ventura Rodríguez. The granite frontage of the church is the only remaining feature of the original construction. Nuns of the Agustinas Recoletas (Augustine order) still use the monastery; therefore, a 45-minute guided tour takes visitors around the areas such as the Royal Room, the monastery church with its reliquaries, the most famous of which is the dried blood of San Pantaleón which reportedly liquefies every year on 28th June, and the monastery museum.
Open hours: Monastery and Reliquary, Wednesday and Saturday - 10:30 to 12:30 and 16:00 to 17:30 and Sunday and public holidays - 11:00 to 13:30
Admission: charge, reasonably priced, reduction for students, free on Wednesday EU citizens
Highlights: Royal Room, altarpiece and frescos
Disabled facilities: none
Nearest metro station: Opera
Other nearby points of interest: Catedral la Alumudena and Palacio Real 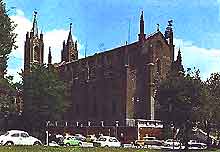 Address: Calle Moreto, 4
Tel: +34 91 420 30 78
Founded in 1464 as the San Jerónimo el Real Convent, on the banks of the Río Manzanares, under Henry IV this royal church was relocated and reconstructed in its present setting in 1503 for Ferdinand and Isabel. During Felipe IV's time in power, (1621 to 1665), subterranean passageways were dug linking the church, also known as Los Jerónimos, to the Casón del Buen Retiro. This chiefly Gothic building came under severe attack during the Napoleonic Wars in 1808, resulting in rebuilding work between 1848 and 1883. It was at this time that the church's towers were added. San Jerónimo el Real has throughout its existence been the site of many royal occasions such as the wedding in 1906 of Alfonso XIII and Victoria of Battenberg and the coronation of Juan Carlos I in 1975.
Open hours: daily - 08:00 to 13:30 and 17:00 to 18:30
Admission: free
Highlights: chapels, stained-glass windows and bronze hanging lamps
Disabled facilities: none
Nearest metro station: Banco de España and Retiro
Nearest railway station: Atocha
Other nearby points of interest: Museo del Prado

Address: Glorieta de San Antonio de la Florida, 5
Tel: +34 91 542 07 22
An approximate ten-minute walk north of the Campo del Moro, the hermitage, or Panteón de Goya, houses some of Francisco de Goya's best works. Located on the site of an earlier hermitage, the Ermita de San Antonio's construction began in 1792 under the direction of Charles IV's Italian architect, Francisco Fontana. Goya's sequences of frescoes were completed in 1798. Two churches are also found on the site, of which the most southerly's ceiling and dome are covered by frescoes, these were renovated in 1993. The frescoes on the dome portray the miracle of St. Anthony where a man is being raised from the dead in order to name his killer. After restoration by the Society of Fine art Lovers, the church was opened as a museum in 1928 and the addition of the Goya Room in 1977, with some of Goya's personal belongings, drawing and etchings, makes this a must see attraction for art enthusiasts. Ermita de San Antonio was declared a national monument in 1905 and in 1919 Goya's body, but no head, was buried here. It has been rumoured that the head was stolen for scientific study.
Open hours: Tuesday to Friday - 10:00 to 14:00 and 16:00 to 20:00, Saturday and Sunday - 10:00 to 14:00, public holidays - closed
Admission: charge, reasonably priced, free on Wednesday and Sunday
Highlights: Cupola and mirrors and lamp beneath, Balustrade and Lápida de Goya
Disabled facilities: none
Nearest metro station: Príncipe Pío, Norte and Plaza de Espana
Nearest railway station: Norte Station
Other nearby points of interest: Parque del Oeste 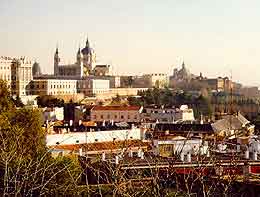 Address: neighbouring Palacio Real on Calle Bailén
Tel: +34 91 542 22 00
The cathedral was finally completed, and sanctified by the Pope, in 1993 after 110 years of work. The architect Giambattista Sacchetti, under Alfonso XII, drew up plans for a cathedral in 1879. These were to be reshaped in 1883 around an outline of a 13th-century cathedral similar to the one at Rheims. In 1944 the architect Fernando Chueca Goitia brought a neoclassical influence to the design. The cloister was not completed until 1955 due to financial problems. It took a further five years after this to finish the facade. The crypt alone took 30 years to complete.
Open hours: daily - 10:00 to 13:30 and 18:00 to 19:45
Admission: free
Disabled facilities: none
Nearest metro station: Opera
Other nearby points of interest: Palacio Real and Plaza del Oriente

Address: Plaza de las Descalzas Reales, 3
Tel: +34 91 542 00 59
Found in the middle of Madrid's commercial area, this is the most famous of Madrid's two monastery museums. Established by Carlos I's youngest daughter Juana (Joanna) of Austria, on the site of her birthplace, the convent was constructed from brick by Antonio Silla and Juan Baustista of Toledo between 1559 and 1564. Diego de Villanueva completed the church in 1570. Opened as a national museum in 1961 the convent is still home to a maximum of 33 Franciscan nuns of the Santa Clara order. The sisters each look after one of 33 chapels that were established by the original nuns on their acceptance into the order. Convento de las Descalzas Reales can only be viewed via a 45-minute guided tour that is only conducted in Spanish. Starting with the grand staircase, the tour encompasses approximately a quarter of the convent.
Open hours: Convent, Tuesday to Thursday and Saturday - 10:30 to 12:30 and 16:00 to 17:30, Friday - 10:30 to 12:30, Sunday and public holidays - 11:00 to 13:30. Access to the church is only during mass at 08:00 or 19:00
Admission: charge, modestly priced, reduction for students, free on Wednesday to EU citizens
Highlights: church, 'The Empress María' by Goya and bust of the 'Mater Dolorosa' by José Risueño
Disabled facilities: none
Nearest metro station: Sol and Callao
Other nearby points of interest: Puerta del Sol, Real Academia de Bellas Artes de San Fernando

Address: Hortaleza, 63
Tel: +34 91 521 74 73
Housing a splendid art collection, the Convento de San Antón is an example of baroque architecture, which was designed by Pedro Ribera and constructed by Juan de Villanueva. Highlights include The 'Last Communion of José de Calasanz' by Goya and the 'Dolphin's' statue by Ventura Rodríguez's.
Nearest metro station: Tribunal and Chueca

Address: Plaza de San Andrés, 1
Tel: +34 91 365 48 71
Aesthetically pleasing when viewed lit up at night, the Iglesia de San Andrés is noteworthy for its Bishop's Chapel, which was erected between 1520 and 1530, and demonstrates the change between the Gothic and Renaissance era. The cupola above the sanctuary of the San Andrés Chapel originates from the late 15th century. Highlights include Capilla del Obispo (Bishop's Chapel), a wooden altarpiece carved by Francisco Giralta and paintings by Villoldo el Mozo above the altarpiece.
Open hours: Monday to Saturday - 08:00 to 12:30, public holidays - closed, not to be visited during Mass
Disabled facilities: none
Nearest metro station: Tribunal and Chueca

Address: Plaza de San Francisco
Tel: +34 91 365 38 00
The erection of the basilica began in 1761 adhering to the plans of Friar Francisco Cabezas and was finished under the direction of the architect Francisco Sabatini in 1784. Features of the church include a dome with an internal diameter measuring over 30 metres / 100 feet, surpassing the domes of St. Paul's Cathedral in London and Paris' Les Invalides, a museum, seven chapels and around the rotunda, white Carrara marble statues of the apostles. Highlights are the neoclassical façade by Francisco Sabatini, 'The Sermon of San Bernadino de Siena' by Goya - purported to contain a self-portrait of the artist and also the Frescoes by Francisco Bayeu.
Open hours: Tuesday to Saturday - 11:00 to 13:00 and 16:00 to 18:30
Disabled facilities: none
Nearest metro station: La Latina and Tirso de Molina

Address: Calle Toledo, 37 / 39
Tel: +34 91 369 20 37
Originally constructed for the Jesuits in 1620 by Pedro Sánchez, the church was seized by Carlos III once the Jesuits had been excluded from Spain. It was at this time that the venerated remains of the city's patron saint, San Isidro Labrador, were relocated from Iglesia de San Andrés. This massive baroque church, with its immense dome, was the capital's unofficial Cathedral during the period 1885 to 1993 pending the completion of the neoclassical church of Nuestra Señora de la Almudena.
Disabled facilities: none
Nearest metro station: La Latina

Address: Plaza de San Nicolás, 6
Tel: +34 91 559 40 64
Although greatly renovated after the Civil War, San Nicolás de los Servitas is Madrid's oldest church. The church's tower is thought to have been a mosque's minaret, which was later sanctified as a Catholic Church. The remains of the architect Juan de Herrera were buried in the crypt in 1597. Highlights include a 12th-century Mudéjar tower, designated as a national monument and a Gothic apse.
Open hours: Monday - 09:00 to 13:30, not to be visited during Mass
Disabled facilities: none
Nearest metro station: La Latina and Tirso de Molina

Address: Calle Nuncio, 14
Tel: +34 91 365 12 84
The church is so named to tell it apart from another newer St. Peter's in Madrid. Standing on the site of an old mosque, part of the church's interior dates back to the 15th century whilst the rest is predominantly 18th century and the church is notable for the folklore surrounding it. One myth relates to the church's original bell, which was so great that it was too heavy to be carried up to the bell tower - therefore, it was left resting outside overnight. The following morning the bell was found to be hanging in the tower. This 'miracle' gave rise to the idea that the bell had magical properties such as the ability to deflect storms. The bell was taken away from the church in 1565. Highlights include 14th-century Mudéjar tower, coat of arms in entrance way - only ones in existence from the era prior to the Catholic monarchy.
Open hours: Tuesday to Thursday - 08:00 to 12:30 and 17:00 to 20:00, Friday - all day, not to be visited during Mass
Disabled facilities: none
Nearest metro station: La Latina and Tirso de Molina

Address: Calle Bárbara de Braganza, 3
Built on the orders of Fernando VI's wife Bárbara de Braganza this is possibly the most striking of Madrid's churches and probably the most ostentatious. Carlier and Moradillo constructed the ornate frontage of the church between 1750 and 1758. Containing the vault of Fernando VI, 1713 to 1759, las Salesas is home of the Palacio de Justicia (Supreme Court).
Nearest metro station: Alonso Martínez and Colón