Getting Around, Madrid Travel, Transport and Car Rental 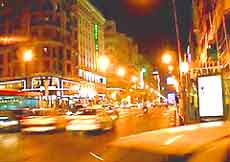 Madrid is a relatively easy city to get around. The centre is fairly compact and most of the sights are within walking distance of one another. Much of Madrid is pedestrianised and if you are in the compact city centre there is an excellent bus network and local railway. Alternatively, if you prefer to be driven around there are plenty of taxis, although these can prove a more expensive way to travel.

Spain's capital city is served by Spain's premier airport, the busy and efficient Madrid Barajas Airport (MAD). It is located 9 miles / 15 km from the centre of Madrid and handles a large number of international and domestic flights. 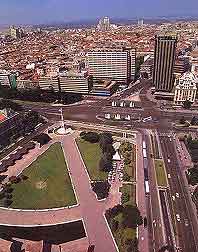 Buses (autobús) operate throughout Madrid, with over 150 lines reaching almost every part of the city and surrounding areas. The municipal transport system (EMT) operates this extensive, reliable service, which covers a larger area of the city than the underground Metro train - although the buses do tend to be a little slower to reach the destination. In the summer they have air conditioning, which can make travelling in hot weather much more comfortable. Most bus stops have detailed city maps and these include the city's many bus routes. The bus service operates between 05:30 to 23:30 and a bargain ticket (bono bus), valid for ten rides, is available at EMT booths and on the buses. There are also night buses (buhos), with about 20 bus lines, operating between midnight and 06:00.

There are also many hop on / off tours and shuttle buses, which operate in and around the city and are an ideal way to both sightsee and travel.

Traffic in Spain has increased greatly in the last few years and although the city can become somewhat congested at peak times, a car provides a very convenient way to travel outside of the city centre. If you do not take your own car, there are plenty of car rental firms to choose from, with a wide variety of cars. Car rental can be expensive in the peak season and the best rates may be obtained by booking in advance. Car rental usually includes unlimited mileage, comprehensive insurance cover, 24-hour emergency road service and theft protection.


Rules of the Road

It is always advisable to park in officially designated car parks. There are also many underground car parks (parking lots) and these are indicated by blue signs with a white letter 'P'. There is usually a sign displaying either 'libre' (which means 'available space') - or 'completo' (meaning full). Parking on the street is regulated by yellow markings along the edge of the road and parking meters are gradually being introduced. Parking rules are strictly enforced in Madrid.

Taxis are plentiful and competitively priced, providing a reasonable alternative way to travel, particularly when the cost can be shared amongst a small group. All official taxis are white with a red stripe and blue shield. Most drivers are honest and taxis can be hailed on main streets at all times, both day and night. If a taxi is available for hire, a 'libre' (free) sign is displayed in the windscreen. Standard rates are shown on the meter and there are supplements for baggage, extra passengers, trips at nights and also for those departing from railway stations or the airport. When taking taxis from the airport, bus and train stations, it is always advisable to use the official taxi ranks and avoid non-metered cars, which are expensive and usually charge premium rates.

The Metro is Madrid's underground train system and provides a cheap, fast and very convenient way to travel around Madrid. The subway is probably the best way to travel in Madrid and consists of an extensive network of ten lines and over 120 trains, which cover most of the city. During the summer months, the Metro can get extremely hot and crowded, although some trains are now air conditioned.

Metro stations are indicated by a red, blue and white sign and the trains run from 06:00 to 01:30. Tickets can be purchased at station ticket booths or machines and 'ten-journey tickets' can be shared by more than one person travelling, and these are also valid for bus travel.

Madrid's has three main train stations, which all link to metro lines and operate between 05:30 to 23:00 and seat reservations are often required.

Cercanías is the greater Madrid light railway, which travels outside of Madrid and provides one of the cheapest and fastest ways to travel to nearby cities and attractions, particularly to Toledo, Segovia, Avila, El Escorial, Aranjuez, Chinchon and Alcala de Henares. Near the city centre, these stations are underground, but trains travel above ground further out. In the winter they are heated and in the summer, a pleasant temperature is maintained by air conditioning. The Cercanías stations are indicated by a large white, upside-down 'C' on a red sign.

Cycling in the city centre is best avoided, as the traffic can be quite congested and drivers have little respect for cyclists. However, cycling in the hills nearby is increasing in popularity and this is a pleasant way to enjoy the scenery. There are many bicycle rental shops throughout the city and bikes can be rented by the hour, day or week.

Transporting bicycles on buses is often at the discretion of the driver, but on the metro you are permitted to carry your bicycle at no extra cost. On most trains you are allowed to carry bicycles all day at weekends and on public holidays, and up to 15:00 on weekdays.