Among the many unique monuments and landmarks in Madrid are the puertas (gateways). These features indicate the termination of the main routes into the city and the last of these gateways to be constructed was Puerta de Toledo (built 1813 to 1827), the entry to the city from Andalucia. These monuments are often aesthetically best when illuminated at night. 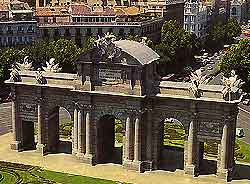 Address: Plaza de Independencia
Situated at the heart of a huge intersection, visitors to the city are only able to view the gateway from afar due to the large amount of traffic surrounding it. However, if travelling from Barajas airport to Madrid's centre by taxi, the Puerta de Alcalá is one of the first monuments to be seen. The Puerta, which is classed as a national monument, is an excellent example of neoclassical architecture and was made to order for Carlos III. Five plans by five different architects were discarded before the design by Francisco Sabatini was accepted in 1778. Intended to be the primary entrance to the Court the gateway comprises of five granite and stone archways, three main arches, each decorated by lions' heads by Robert Michel, bordered by two smaller ones. Atop the monument are cherubim, trophies and the coat of arms, which are the work of Francisco Gutiérrez.
Puerta de Alcalá is best surveyed at night when it is floodlit.
Nearest metro station: Retiro
Nearest railway station: Recoletos
Other nearby points of interest: Plaza de la Cibeles 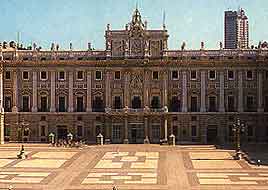 Address: Calle de Bailén
Tel: +34 91 542 00 59
Also referred to as the Palacio de Oriente (Palace of the East) or the Palace Nacional (National Palace).
When Madrid's old Muslim fortress (El Alcázar) was demolished in 1734 by a fire, Felipe V used the opportunity in 1737 to have an opulent Royal Palace constructed. Filippo Juvara conceived the first plans, however, there were neither finances nor a sizeable enough location to build the planned palace whose façades were to each measure 476 metres / 1,561 feet, three times the length of today's frontage. The Royal Palace was redesigned by Juan Bautista Sacchetti and was not finished until 1764. Francisco Sabatini and Ventura Rodríguez also contributed towards the undertaking.

The royal family do not use the 2,800-roomed Palacio Real as their residence, though at times it is used for state occasions. Due to security reasons the only way to view the palace is on a guided tour, which is organised according to what language is spoken by visitors. The tour lasts an hour and takes in approximately 50 of the most impressive rooms including the Hall of the Halberdiers, the Official Chamber, Salón del Trono (Throne Room), apartments of Carlos III, Salón de Gasparini (Gasparini Room), Comedor de Gala (Gala Dining Room), Museum of Paintings, Farmacia Real (Royal Pharmacy), Armería Real (Royal Armoury) and the Sala de Porcelana (Porcelain Room). The best viewpoint of the palace is from the formal Sabatini Gardens, located to the north of the Palacio whilst the Campo del Moro (Moor's Field), with its impressive carriage museum, is found to the rear.
Open hours: Monday to Saturday - 09:30 to 17:30, Sunday and public holidays - 09:00 to 14:00, closed for official functions
Admission: charge, modestly priced, reduction for students, free on Wednesday for EU citizens when passport shown
Highlights: Clock collection, Music Museum and Sabatini Gardens
Disabled facilities: very good
Nearest metro station: Opera
Other nearby points of interest: Catedral la Alumudena 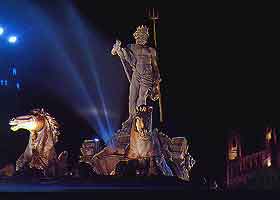 Address: Colón. Plaza de San Juan de la Cruz
In 1994 the 20th-century sculptor Fernando Botero had an exhibition in part of Paseo de la Castellana. When the exhibition finished the city kept a few of the pieces. These works were a 'Hand', which is sited in the centre of Castellana, the 'Reclining Woman' in Calle Génova and 'Man on a Mule', located in the Plaza de Colón.
Nearest metro station: Colón and Nuevos Ministerios

Address: Jardines del Arquitecto Ribera, Calle Barceló,
To the rear of the Municipal Museum is a playground, which was the Ribera Gardens. Still a feature of the recreational area is the baroque fountain by Pedro Ribera.
Nearest metro station: Tribunal

Address: Paseo de la del Castellana
Above the Paseo de La Castellana is a walkway which links Calle Juan Bravo and Calle Eduardo Dato, under which is an alfresco exhibition of sculpture in stone, concrete and metal. On display are works by Spain's acclaimed modern artists, including Miró, Sempere and Chillida.
Nearest metro station: Rubén Darío