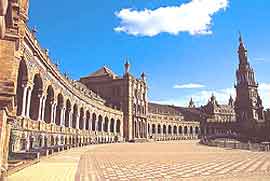 The Spanish capital is a city of culture, history and vibrance. However, Madrid also offers a series of themed family attractions, which are highly suitable for those visiting with children on tow.

Perhaps the ultimate family attraction, the Madrid Zoo Aquarium (the Parque Zoológico) has a lengthy heritage and boasts origins all the way back in 1770, when it was located within Retiro Park and known as the 'Casa de Fieras'. Relocated to the Casa de Campo parkland in 1972, the zoo is now called home by in excess of 6,000 creatures, comprising some 500 different species.

The city's giant urban park named the Casa de Campo, which is located on the western side of Madrid city centre, is also where you will encounter the equally popular and appealing amusement park named the Parque de Atracciones. This fun theme park is basically a glorified funfair, complete with a variety of family friendly rides and no less than five exciting rollercoasters, such as the Abyss, the Tarantula and the Tornado.

Further child-friendly attractions in the Spanish capital include the Snowzone Skiing Centre at the Xanadu Mall, and the National Railway Museum (Museo Nacional de Ferrocarril) on the Paseo de las Delicias, while nearby, the giant Aquópolis water park offers the perfect place for families on a sunny holiday, especially when the Spanish sun is shining down. On the outskirts of the city, Safari Madrid may also be of interest, particularly if you are passing through the neighbouring municipality of Aldea del Fresno. 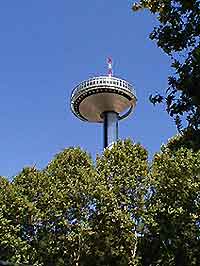 Address: Avenida de la Victoria
Tel: +34 91 544 81 04
Located opposite the Museo de América, the Faro de Moncloa is a stainless steel tower measuring some 100 metres / 328 feet in height. The tower was erected in 1992 and offers panoramic vistas of the city from its observation deck. Following a change in Spanish fire regulations, it was decided that the spiral staircase was too narrow and so the tower was closed to the public in 2005. However, recent investment has seen the addition of a lift, wider stairs, a visitor centre and a restaurant located at the very top.
Open hours: daily - 10:30 to 14:15 and 16:30 to 19:15 (summer until 20:15), closed during bad weather conditions
Admission: charge, reasonably priced
Nearest metro station: Moncloa

Address: Xanadu Mall, Autovia de Extremadura (A5)
Tel: +34 91 648 26 36
Located roughly 30 minutes to the south-west of the city centre, Minigolf Madrid is housed within the Xanadu Shopping Mall and offers a themed indoor enclosure. This miniature golf course serves as a useful wet-weather attraction, while also onsite is the popular Snowzone, where two slopes allow you to practice a spot of skiing and snowboarding on real snow. Nearby you will find a whole host of shops, over 30 restaurants, tenpin bowling, go-karts and a cinema.
Open hours: Sunday to Wednesday - 10:00 to 22:00, Thursday - 10:00 to midnight, Friday and Saturday - 10:00 to 02:00

Address: Paseo de las Delicias, 61
Tel: +34 90 222 88 22
A museum dedicated to the depiction of how rail transportation evolved, the Museo Nacional de Ferrocarril is situated within the former Delicias station and comes highly recommended. Exhibits include a number of steam locomotives and a room with a miniature railway layout, although it should be noted that all of the information is currently only shown in Spanish.
Nearest metro station: Atocha

Address: Paseo de Recoletos, 14
Tel: +34 91 319 46 81
This privately run waxworks displays around 450 historical and contemporary, national and international celebrities in a wax form. Located on the Paseo de Recoletos and close to the Biblioteca Nacional de Espana (National Library of Spain), the Museo Colón de Figuras de Cera may not quite be Madame Tussaud's, but it does serve to fill an hour if you are looking for something fun to do. However, the quality and realism of the wax works on exhibit is certainly a little variable, with characters including famous Spanish matadors, movie stars, religious figures and famous rock bands from history, such as the Beatles.
Open hours: daily - 10:00 to 14:30 and 16:30 to 20:30
Admission: chargeable
Nearest metro station: Colón

Address: Avenida de Planetario, Parque Tierno Galván
Tel: +34 91 467 34 61
Officially inaugurated in 1986, the city's planetarium is located on the southern side of the city, where it provides an engaging and enlightening look at the solar system, with audio-visual shows making use of some 150 individual projectors. Many changing exhibits are staged here throughout the course of the year and in the past these have included overviews of astronomy, astrophysics, black holes, space travel and Halley's Comet. Various workshops and activities provide added interest, along with the science-related goodies for sale in the gift shop.
Nearest metro station: Méndez Alvaro

Address: Pintor Murillo, Parque de Andalucia, Alcobendas
Tel: +34 91 661 39 09
Hands-on displays enable children to experience the pleasures of science at the first interactive science museum in the city. One drawback of this museum is that many sectors feature Spanish-only labels and so it may require a little imagination to understand what you are actually looking at.
Open hours: Monday to Friday - 10:00 to 18:00, Saturday, Sunday and public holidays - 10:00 to 20:00
Distance: 17 km / 11 miles north of Madrid
Nearest metro station: Plaza Castilla (for bus departures)
Nearest bus route: Plaza Castilla - every 20 minutes

Address: Villanueva de la Canada, Carretera de El Escorial
Tel: +34 91 815 69 11
As well as being the most impressive of the city's water parks, Aquópolis is one of the biggest in Europe. An adventure lake, wave machines and enormous water slides are some of the enticements to this park, which soon fills up on sunny summer afternoons.
Open hours: Monday to Friday - 12:00 to 20:00, Saturday, Sunday and public holidays - 11:00 to 20:00
Distance: 25 km / 16 miles

Address: Reserva El Rincón, Aldea del Fresno, CN V via Navalcarnero
Tel: +34 34 91 862 23 14
Located roughly an hours' drive to the west of central Madrid, this safari experience resides within the municipality of Aldea del Fresno. Visitors can drive through paddocks, passing by buffalos, llamas, monkeys, ostriches, rhinos and zebras, while there is also a mini-zoo with reptiles and other exotics, where regular animal performance shows are a highlight. However, it should be noted that this attraction tends to get mixed reviews, with many visitors commenting on the dated enclosures.
Distance: 55 km / 34 miles