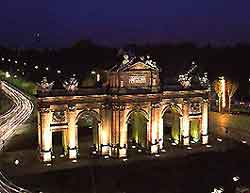 As the capital of Spain, Madrid is quite rightly blessed with some of the country's most prestigious buildings and most visited tourist attractions. Sightseeing has certainly become something of a mainstay for Madrid, and both bus tours and walking tours are recommended when you first arrive, allowing you to quickly familiarise yourself with the city and all that it has to offer you.

There are a number of attractions that really should not be overlooked by tourists, such as the unusual gardens of the Estación de Atocha, the historical bullring known as the Plaza de Toros Monumental de Las Ventas, and the Faunia zoological gardens, which reside within the Vicálvaro area of Madrid and are highly suitable for families. Also a firm favourite for children are the exciting attractions at the Parque Warner Madrid theme park, which was previous named Warner Bros Movie World and is to be found within the outlying San Martin de la Vega municipality.

Bus tours are an excellent, structured way to go and see several Madrid attractions in one day. Most companies provide a service throughout the year and depending on the season these operate from each stop every ten to 25 minutes. The average length of a tour is 75 minutes and a ticket, which may be purchased from local travel agencies, hotels, tour operators or the tour bus itself, enables passengers to board and alight from the bus as frequently as they wish. Tours can be both in and beyond the city limits.

Several walking tours for English speakers, approximately 90 minutes in duration, are arranged during the months of July, August and September. 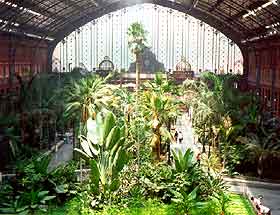 Address: Avenida de los Toreros, Calle de Alcalá, 237
Tel: +34 91 356 22 00
This stylish old railway station was first built in 1851 and named the 'Station of Noon'. A fire later destroyed a large part of its structure and it was rebuilt in iron. The splendid architecture is very grand and the beautiful building is generally considered a work of art. No longer a railway station, the inside has been converted into an enormous tropical garden covering more than 2,000 square metres / 21,500 square feet, with over 400 species and 7,000 plants.
Open hours: daily - 07:00 to 00:00
Admission: free
Disabled facilities: some
Nearest metro station: Atocha 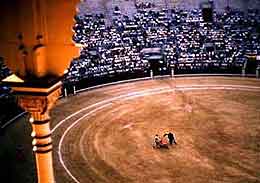 Address: Avenida de los Toreros, Calle de Alcalá, 237
Tel: +34 91 356 22 00
The world's most important bullring was officially opened in 1934 and is a wonderful illustration of neo-Mudéjar architecture. This style was resurrected in the 19th century and replicated the design of the 13th and 14th centuries and is exemplified by a unique use of brickwork and vivid ceramic tiles. Facing the bullring is a square with a statue in commemoration of the bullfighter José Cubero, which is inscribed ' a bullfighter dies, and an angel is born'. Located next to the stables is the Museo Taurino, which provides visitors with a synopsis of bullfighting and its celebrities.
Open hours: Museo Taurino, Tuesday to Friday - 09:30 to 14:30, Sunday - 10:00 to 13:00
Admission: Museo Taurino free
Disabled facilities: none
Nearest metro station: Ventas

Tel: +34 91 519 31 12
Formerly known as the Parque Biológico de Madrid (Environmental Park), Faunia was opened in May 2001. The objective of the 140,000-square-metres / 459,200-square-feet nature park is to show how animal and plant life has accustomed itself to the diversity of the world's environments. Faunia is not a conventional amusement park or zoo, but an assembly of themed conservatories, ten in total, which mimic a variety of ecosystems. With the use of technology the world's climatic zones are represented and range from tropical rainforest and the Mediterranean to the Polar Regions. The pavilions hold over 4,000 animals, which represent more than 720 species and in addition there are in excess of 72,000 trees and shrubs. The principal aim of the park is to educate people, especially children, in the need to protect the natural world.

With a lecture theatre, animal hospital, lake, dining areas and nursery there are plenty of things to see and do at the park. Faunia is accessible by public transport but 1,200 car park spaces mean visitors will find it just as accessible to use their own modes of travel.
Open hours: daily - 09:00 to 20:00
Admission: chargeable, reductions for seniors and children under 12. Children under three accompanied by an adult go free

Address: 25 km from Madrid in San Martin area
Parque Warner Madrid is 150 hectares / 371 acres of amusement park situated in 500 hectares / 1,235 acres of grounds which contain car parks and administrative buildings. The park, which is separated into five themed sectors, opened in March 2002 and is the third such site in Spain. The theme park is fashioned on the lines of those in Australia and Germany and includes such attractions as a 3D cinema, the Looney Tunes Express, a teacup ride, the Rio Bravo water ride, a cartoon theatre and a wooden roller coaster. Restaurants, Mediterranean, fish and pizza amongst others, gift shops and live shows, also occupy the site. Children will be delighted to see their favourite costumed cartoon characters wandering around the park. Parque Warner is accessible via the M-506 and M-301 routes.
Open hours: Spring to late autumn
Admission: charge