Madrid is Europe's greenest capital city and this is predominantly due to the vast expanse that is the Casa de Campo. However, there are many other parks in Madrid of varying sizes for visitors to enjoy. 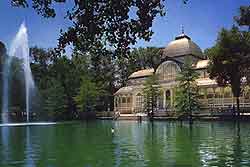 Address: Calle Alcalá, Alfonso XII, Avenida de Menedez Pelayo, Paseo de la Reina Cristina
Retiro was once a forested royal hunting ground for Felipe II. The Duke of Olivares, as part of the Buen Retiro Palace, designed the park in the 1630s for Felipe IV. The Buen Retiro Palace was used until the era of Carlos III before being opened in part to the public in the 1770s. Unfortunately, the majority of the palace was ruined during the Napoleonic Wars. The 1.2 square kilometres / 0.75 square miles of park is best visited at weekends when pavement artists, puppet shows and street performers emerge. There is also the prospect of riding in horse-drawn carriages or hiring rowing boats on the lake
Highlights: Palacio de Cristál (Glass Palace), estanque (artificial lake) and Felipe IV parterre
Nearest metro station: Retiro, Banco, Atocha and Ibiza
Nearest railway station: Atocha
Other nearby points of interest: Museo Thyssen-Bornemisza, Museo del Prado and Puerta de Alcalá

Address: Jardines del Paseo del Pintor Rosales
Tel: +34 91 409 61 65
With fewer visitors and a more casual feel than Retiro Park, Parque del Oeste is the ideal place to meander through the collection of birch, cedar, cypress and fir trees on summer evenings. First designed by landscape gardener Cecilio Rodríguez in the early 20th century, situated on what once had been a huge waste disposal site, during the Civil War the park sheltered Republicans from the invading Nationalist soldiers, resulting in the area being virtually ruined. 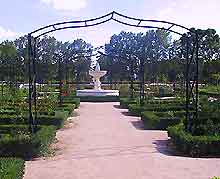 The park is the location of several attractions including La Rosaleda, a 17,000-square-metre / 55,760-square-feet rose garden where annually in May a rose festival is held, a fountain by Juan Villanueva in Paseo de Camoens and the teleférico running to Casa de Campo. The southerly corner of the park, near Plaza de Espana, is home to the 4th-century Egyptian Templo de Debod. This monument, built in the position of a prior military barracks, was a gift in 1970 from the Egyptian government in recognition of the assistance they received in saving valuable artifacts preceding the flooding of plains of land due to the erection of the Aswan Dam. The temple, in dedication of the Egyptian god Amon, was dismantled in Egypt before it was relocated to Spain to be reassembled piece by piece amongst palm trees and other exotic flora. During summer months outdoor cafés and bars are established along Ernest Hemingway's favourite street, the Paseo de Pintor Rosales.
Open hours: Templo de Debod - Tuesday to Friday - 10:00 to 15:45 and 16:15 to 18:15, Saturday and Sunday - 10:00 to 14:00, public holidays - closed. Teleférico: April to September, daily - 11:00 to 22:00, rest of the year, weekends and holidays - 12:00 to 22:00
Admission: Templo de Debod - charge, reasonably priced, free on Wednesday and Sunday. Teleférico - charge
Nearest metro station: Plaza de Espana, Ventura Rodríguez and Moncloa
Other nearby points of interest: Ermita de San Antonio

Address: adjacent to the Prado, Plaza de Murillo, 2
Originally sited at El Huerto de Migas Calientes, the garden was founded in 1755 under Fernando VI in order to showcase plant and tree species, which had been gathered on overseas journeys. Later the 8-hectare / 20-acre grounds were relocated to their current setting under Carlos III, with the plants catalogued and planted in a geometric design.
Open hours: daily - 10:00 to 20:00
Admission: charge
Nearest metro station: Atocha
Other nearby points of interest: tropical garden inside Atocha station 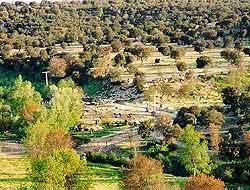 Address: Calle Marqués de Monistrol de Portugal
Until 1931 Casa de Campo's 1,200 hectares / 2,964 acres of wooded land was a royal game park, originally acquired in 1559 by Felipe II. The land was then handed over to the people of Madrid and it became an area for leisure pursuits. Located on the western fringes of Madrid, across the Río Manzanares, Casa de Campo is one of Europe's largest urban open spaces. Today the park possesses many sports and recreational amenities including tennis courts, a swimming pool and El Largo, a sailing lake where rowing boats and canoes can be hired. The grounds are also the sites of Madrid's zoo, with around 150 species of animals and the Parque de Atracciones, a fun fair with over 40 rides and a teleférico (cable car), located on corner of Calle del Marqués de Urquijo in Paseo del Pintor Rosales which runs up to Parque del Oeste.
Nearest metro station: Lago and Batán

Address: Plaza de Colón
The Jardines del Descubrimiento was created in the 1970s to commemorate the contribution of Spain in the discovery of the New World. One of the main features of the gardens is the 1885 statue of Cristóbal Colón (Christopher Columbus) by Jerónimo Suñol; this 17-metres / 56-feet-high monument was a wedding gift to Alfonso XII from the Spanish nobility. The gardens are also the site of four sculptures by Joaquín Vaquero Turcios, which were erected in 1977; three of the statues symbolize the Pinta, the Niña and the Santa María, the ships used in Columbus's journey across the Atlantic in 1492. The last monument represents the New World. The best viewing point of these structures is from Lake Serrano. Below the Jardines del Descubrimiento, the Centro Cultural de la Ville (City Cultural Centre) is found. Opened in 1977 it is the site of concerts, exhibitions and theatre performances.
Highlights: statue of Christopher Columbus, water curtain and Turcios statues
Nearest metro station: Colón
Nearest railway station: Recoletos
Other nearby points of interest: Archaeological Museum

Address: Alcade Sainz de Baranda
A small, shady 17th-century garden, which although located a little way south of the bullring and nearby the M30 motorway, is one of Madrid's undisclosed gems with a number of striking statues.
Nearest metro station: O'Donnell

Address: Avendia de la Alameda de Osuna
Although some distance from the city centre, this beautiful garden, with its design verging on that of a well-groomed English garden, is an agreeable place for a leisurely walk.
Nearest metro station: Canillejas

Address: Travesía Vistillas
These gardens give a breathtaking panoramic view across the Casa de Campo, in the direction of the Sierra de Guadarrama.
Nearest metro station: Opera and La Latina