There are many appealing areas that are within a half-day and full-day visiting range of Madrid. 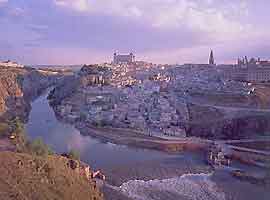 Address: approximately 70 km / 44 miles south-west of Madrid
Declared as a national monument, Toledo, a small city found on a Castilian hilltop overlooking the Río Tajo (River Tagus), was once the Spanish capital under the Visigoths (567 to 711) and again when Felipe II moved the Court of Spain to Madrid (1085 to 1561).

This city has grown in size and has many architectural wonders, interesting buildings, museums and monuments. Toledo is well worth a visit and is one of the most popular excursions from nearby Madrid.
More information...

Address: approximately 88 km / 55 miles north-west of Madrid
Founded during the Iberian period, Segovia is considered to be the most dramatically situated in Spain and also the capital of Catalan cuisine. It is located atop an outcrop, with a view looking over the convergence of the Río Eresma and Río Clamores. Taken by the Romans in 80 BC and occupied by the Moors before reverting to the Christians in 1085, Segovia has had a colourful past. Steeped in history, there are many wonderful historic buildings, churches and Roman remains and Segovia is an extremely popular choice of weekend destination for the inhabitants of Madrid.

Address: approximately 112 km / 70 miles north-west of Madrid
Ávila is Spain's highest provincial city being approximately 1,130 metres / 3,706 feet above sea level. It sits against the backdrop of the Sierra de Ávila, on a ridge that overlooks the Río Adaja (River Adaja) and a craggy plain. Iberian tribes established the city before it was integrated into the Celtic culture and eventually Romanised and Christianised. Ávila is the celebrated birthplace of Santa Teresa de Jesús (St. Theresa of Jesus) 1515 to 1582 and is also famous for its medieval Las Murallas (town walls), the best-maintained example to be found in Europe. The city has become a significant centre for commerce.

Address: approximately 48 km / 30 miles south of Madrid
Situated where the Río Tajo (River Tagus) and Río Jarama (River Jarama) flow together, Aranjuez has been declared a UNESCO world heritage landscape. During the Middle Ages, Aranjuez was the realm of the military order of Santiago before the Reyes Católicos (Catholic Monarchs) drove them out. Famed for its Palacio Real (Royal Palace) and huge lavish gardens, amongst other things the city is known for is its much-admired crops of asparagus and strawberries and the fact that it is an extremely important breeding site for butterflies.

Address: approximately 50 km / 31 miles south-east of Madrid, 20 km / 12 miles from Aranjuez
This town is famed for the brewing of the aniseed flavoured liqueur 'anis' as well as its plaza, which has appeared in several films. Chinchón also cultivates a valued variety of garlic, which is sold in large bunches. There are many places of interest, such as the Plaza Mayor (Main Square), which is the focal point of Chinchón.

- 50 km / 31 miles south-east of Madrid
This town is roughly 1,038 metres / 3,460 feet above sea level and as well as being a popular escape from Madrid by the capital's residences during the hotter months of the year, it is famous for the Palacio de San Lorenzo de El Escorial (Palace of St. Lawrence of El Escorial) complex, which has over 300 rooms.

Address: approximately 30 km / 19 miles east of Madrid
This modern, industrial town situated on the Río Henares is built on what originally was an Iberian settlement, which became the Roman town of Complutum. Today Alcalá de Henares is a UNESCO world heritage city but originally became renowned as a university town when Cardinal Cisneros founded the Universidad Complutense here in 1486. In the 16th century the town was to become one of Europe's principal seats of education. Alcalá is also famed as the birthplace of Miguel de Cervantes y Saavedra.

Address: 15 km / 9 miles north-west from Madrid
This area, still wooded in places, was once a royal forest estate and is home to the popular Warner Bros Movie World theme park and also the Royal Palace of El Pardo, a large and grand 15-century palace.