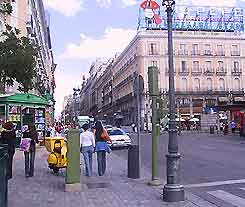 Madrid is without doubt one of the main centres for shopping in Spain and the numerous districts provide a shoppers' paradise. Whether you are looking for Spanish fashion, antiques, furniture or home accessories, rest assured that Madrid will provide you with a huge choice. Most shops are open Monday to Saturday from 09:30 to 14:00, reopening between 16:00 to 17:00 until around 20:00, or maybe later.

Many shops close on Saturday afternoons and in July and August, some small shops close completely. On Sunday, some of the larger stores open, together with the small cake shops and a handful of other shops.

There are a number of different shopping zones within central Madrid, with a very diverse range of shops. Around Calles Preciados, which has been pedestrianised, Puerta del Sol and Montera, there are department stores and shops, including bargain-basements, craft, jewellery, clothes and many tourist outlets. Old craft and curiousity shops can be found along Calles Mayor, Arenal and also Plaza Mayor. Further south is the Mercado de Puerta de Toledo mall, a very chic collection of over 140 shops, also open on Sundays, which has become a popular place to shop. To the east of Puerta del Sol are some interesting art and antique showrooms in Carrera de San Jerónimo and Calle del Prado. Gran Via was once the most fashionable shopping boulevard in the city, and although these days that is no longer true, it still has a good collection of shops. Some of the city's best fashion outlets can be found nearby in Calle de Génova, Calles Almirante, Conde de Xiquena, Argensola and Orellana.

The Salamanca is a major shopping area in Madrid, with some of the city's largest and best stores. This is definitely the place to come for some serious shopping and a huge range of shops are located along Serrano and parallel streets, Claudio Coello, Lagasca and Velázquez. There is also an excellent selection of shops to be found nearby, within the grid of connecting streets.

There are a varied choice of goods situated north-west of Plaza de Espana, at Calles de la Princesa, Martin de los Heros and other nearby streets. The large El Corte Inglés department store and also the Multicentro Princesa are located in this area, near to the Argülles metro station. There are also a large number of bookshops along the Calle Alberto Aguilera, which is near to the university.

Nestled amongst Madrid's tall skyscrapers and modern buildings are many great stores, offering a wide choice for Madrid shoppers. Next to the Azca commercial development is the Moda shopping mall, which is crammed with interesting shops. Also, further north, the La Vaguada is one of Madrid's largest complexes and houses around 350 outlets, including a department store, fashion outlets, cafés and countless others places to eat - and there are even cinemas.

Most department stores in Madrid open between 10:00 to 21:00, Monday to Saturday.

El Corte Inglés is one of Madrid's largest department stores and is popular throughout the country. It is simply vast and sells almost everything that you could possibly need - there is even a large, well-stocked supermarket. With multilingual staff and air conditioning, this huge store is well worth a visit.

With countless designer-label shops, such as Versace, Armani and famous Spanish designers, including Adolfo Dominquez, Purificación García and Antonio Pernas, high-fashion is popular in Madrid. There are many boutiques, for both men and women, in this capital city that sell the latest European styles, created by some of the world's top designers. Some of the best boutiques can be found in and around Calle Almirante, in the Salamanca district, and also in the shopping malls.

There are some superb antique shops in Madrid and some of the best ones are in the Salamanca area and also Huertas, around Calle de Prado. For serious antique hunting, the Galerias Piquer in Puerto de Toledo and Nuevas Galerias both have a large concentration of shops, set in an attractive arcade. Antiques are very varied from shop to shop, both in choice and price, and so it is worth spending time browsing to compare quality and prices.

There are food markets throughout Madrid and some of the top speciality food and wine stores are located within old Madrid. Throughout Madrid, large and small shops that specialise in meats, cheeses, fruit, cakes and bread can be easily found. There is even a shop called the Museo del Jamón (Ham Museum) which has several outlets in the city, where customers can sample the various types of ham before deciding whether or not to purchase.