The plazas in Madrid have traditionally been the centre for the bringing together of the local population, especially in celebrations. Despite their name, plazas, or squares, can vary in shape, also being round, oval and rectangular. Advertisements at metro stations will provide information on any local events that are due to occur in the plazas. 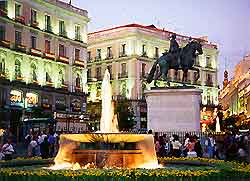 Madrid's busiest plaza is also the city's most central point and a favoured meeting place for Madrileños. Entry to the square can be via any of ten streets, chiefly from the west Calles Mayor and Arenal and to the east of the plaza Calle Alcalá and Carrera San Jerónimo. The area name was obtained from a motif of el Sol (the Sun) which adorned the frontage of a chapel, that has long since been demolished. The square's namesake gateway was removed in 1570 when the plaza was remodelled to welcome the fourth wife of Felipe II, Anne of Austria. Dominating Puerta del Sol on its south side is the Casa de Correos (General Post Office). This building, which dates back to 1768, is no longer the Post Office and is now headquarters of the regional government. The late-baroque design of the building is the work of French architect Jaime Marquet although the clock tower was a later addition in 1866. It is traditional on New Year's Eve for hoards of people to congregate and listen to the chiming of the clock whilst trying to consume a dozen grapes, one on each strike of midnight, before a fireworks display is set off. A paved slab outside the front of Casa de Correos marks Spain's Kilometre Zero, the place from where all distances in Spain are calibrated.
At the juncture of Sol with Calle Preciados is a statue based on Madrid's coat of arms, el osso y madroño, a bear eating the fruit of an arbutus (strawberry tree). Just north of this image, in the centre of the square is another statue in the likeness of Carlos III. Sol has historically been the stage of much unrest. It was here that the Esquilache mutiny started in 1766, the unlikely catalyst being the decree by Carlos III that society should don short capes and tri-cornered hats to mimic a disliked French fashion. The most notable unrest in Sol was on the 2nd and 3rd May 1808 when Madrid's people fought Napoleon's men, over 2,000 people were killed.
Nearest metro station: Sol
Other nearby points of interest: Plaza Mayor, Convento de las Descalzas Reales and Real Academia de Bellas Artes de San Fernando

The semicircular Plaza de Oriente was originally designed in 1811 under Joseph Bonaparte who ordered the knocking down of existing buildings to afford a better view for the Palacio Real. Bonaparte's intent was to have something similar to the Champs Elysées extending from the plaza to Cibeles Fountain; however, this was not to be. The present day square dates from Queen Isabella II's reign (1833 - 1904).
The dominant feature of the square is an equestrian statue of Felipe IV, which is based on a painting by Velázquez. There are also 44 other statues of royalty throughout the plaza, these were meant to be for the top of the palace but were found to be too heavy. The Teatro Real, Madrid's premier opera house is east of the square.
Nearest metro station: Opera
Other nearby points of interest: Palacio Real and Monasterio de la Encarnación

The rectangular, cobbled Plaza Mayor, whose official name is Plaza de la Constitución, was first constructed as a market square in the 15th century and later referred to as the Plaza del Arrabel (Square outside the Walls). The plaza was then remodelled under Felipe II's command to become the Court's administrative centre. Casa de la Panadería (bakery) was the first part of the plaza to be completed in 1590; the frescoes that can be seen today on the building's facade were an addition in 1992. Architect Juan Gómez de la Mora finished the rest of the square in 1619 under Felipe III, whose equestrian statue in bronze, by Juan de Bolonia and Pietro Tacca, is located in the centre of this area, which measures 120 x 90 metres / 394 x 295 feet. Plaza Mayor has always been an arena for festivities and even executions; hangings took place here until the end of the 18th century, with spectators observing from the balconies around the square. In the 1960's the plaza was pedestrianised and visitors can gain entry to the site via nine archways.
Nearest metro station: Sol and Opera
Other nearby points of interest: Plaza de la Villa

Tel: +34 91 588 29 06 / 08
The square is sited on what was the location of an Arab street market and although small, this precisely rectangular plaza is stunningly illuminated at night.
The plaza is the home of three buildings, each with unique architectural styles, which manage to coexist without discord.
The Madrid Town Council has been convening at the plaza since 1405 in the Ayuntamiento (City Hall), also called la Casa de la Villa, located on the west side. Castilian-baroque in style, the building was designed by Juan Gómez de Mora in 1640. Unfortunately, Mora died before the building, with its two entrances - one for the council and the other to the prison also housed here, was completed in 1695.
To the south of the square is the much renovated Casa de Cisneros. Intended as a palace it was built by a nephew of Cardinal Cisneros in 1537 in the Plateresque style, which was the fashion of this period.
The third building located here is the Casa y Torre de los Lujanes (House and Tower of the Lujanes) with late Gothic civic architecture. Home to one of Madrid's noble families from the 1460s it is rumoured that in 1525, Hernando of Alarcón, the then owner, held King François I of France captive here.
Open hours: buildings, Monday - 17:00 to 18:00, guided tours of some rooms with notable art
Admission: free
Highlights: statue of Admiral Alvaro de Bazán, Staircase of Honour - in Casa del Ayuntamiento and Tapestry Room - in Casa de Cisneros
Disabled facilities: none
Nearest metro station: Sol and Opera
Other nearby points of interest: Plaza Mayor and Puerta del Sol

Located amid intense traffic at one of the city's busiest road crossings, the central feature of the plaza is a beautiful statue and marble fountain of Cibeles, the fertility goddess. The composition of the statue, built on the command of Carlos III (1716 to 1788), is that of Cybele in a chariot drawn by Hipponomes and Atlanta, whom she had turned into lions. Francisco Gutiérrez designed the main statue whilst the lions were by Robert Michel. Completed in 1792, the monument was first sited in a corner of the square, however, the Duke of Romanones decreed that it should be moved in 1895 to its central position. It was at this time that the cherubim were added. Plaza de la Cibeles is home to several imposing buildings the most impressive of which is the Palacio de Comunicaciones (Central Post Office), located on the south-eastern side of the square. Antonio Palacios designed the post office, nicknamed Nuestra Señora de las Comunicaciones (Our Lady of Communications), in 1904 and it was later inaugurated in 1919. Banco de España is also to be found in the plaza, construction of which began in 1891. The result is a mixture of architectural design including neoclassical, baroque and rococo. The Palacio de Buenavista, built in the late 18th century, houses the Cuartel General del Ejército (army headquarters). The square is also address to the Palacio de Linares. Architect Carlos Collubi designed the building, which is rumoured to be haunted, in 1872. After falling into disrepair the Palacio was renovated and opened in 1992, on the 500th anniversary of Columbus's discovery of America, as the Casa de América. Displaying Latin American visual arts, the Casa de América also hosts lectures, theatre performances and music.
Open hours: Palacio de Linares, Tuesday, Thursday and Friday - 09:30 to 11:30, Saturday, Sunday and public holidays - 10:00 to 13:30
Admission: chargeable
Nearest metro station: Banco de España
Nearest railway station: Atocha and Recoletos
Other nearby points of interest: Museo del Prado and Museo Arqueológico Nacional

Situated at the top of El Rastro on the right of the plaza is a seafood bar, which is representative of the area. A statue of local hero Eloy Gonzalo is located on Calle Ribera de Curtidores, just off the square. Whilst down Calle Embajadores, also leading from the square, a huge mural illustrates the Rastro as it was over a century ago.
Nearest metro station: La Latina and Tirso de Molina

The plaza was the location of public executions at the start of the 19th century. The 'garrote vil' was the device used to put criminals to death. The most renowned criminal to be executed at the square was well-liked bandit Luis Candelas in 1837. Bullfights were once held at Plaza de la Cebada before the iron-structured market was opened in 1875, the first such architectural example in Madrid.
Nearest metro station: La Latina and Tirso de Molina

This is the address of the parliament buildings (Congreso de los Diputados) whose official entry is watched over by a couple of bronze lions. The statues were cast from cannons, which returned to Spain from the African War of 1860, and are affectionately called Daoíz and Velarde after the captains who led the resistance against the Napoleonic troops in 1808. Weekly guided tours of the buildings are available.
Nearest metro station: Sevilla 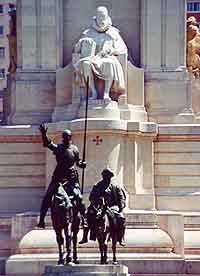 Looking out over the sizeable open area of gardens and concrete from the west end of the plaza, is a stone statue of Cervantes, which was erected in 1927. This statue in turn has a view over a bronze, 1815 statue of Don Quixote, astride a horse, and Sancho Panza on a donkey. Bordering the square on the east is the Edificio España built by the Otamendi brothers. Its 26 floors were completed in 1953 making this building Madrid's first bona fide skyscraper. To the north of Plaza de Espana is the Torre Madrid, which is 137 metres / 449 feet high with 34 floors. When it was built in 1957 it was Europe's tallest building. Based very much on American design this structure was built as a symbol of post-Civil War economic recovery.
Nearest metro station: Plaza de Espana

This well-designed square, located near the Prado, is towered over by the Ritz Hotel as well as being home to the Madrid Stock Exchange. The Exchange was built in 1884 with a neoclassical design sympathetic to the architecture of the Prado. The Plaza de la Lealtad is in fact semicircular in shape and its focus is an obelisk built in commemoration of those killed on 3rd May 1808 during the invasion of Napoleonic troops. The ashes of the dead are held in an urn at the foot of the memorial.
Nearest metro station: Banco de España

The Plaza dos de Mayo is the centre of the neglected district of Malasaña named after Manuela Malasaña, who with her daughter, became a heroine by protecting the neighbourhood from the assault of Napoleonic troops on 2nd May 1808. The square is home to a statue of the two captains leading the resistance, Daoíz and Velarde
Nearest metro station: Bilbao

Plaza de la Paja was the location of Madrid's principal 'zoco' (street market) throughout Muslim rule. The Middle Ages saw the square become the sought-after site for upper-class homes. The most renowned of these palaces is no. 14, the Lasso de Castilla, which was the favoured residence of Catholic kings when they stayed in Madrid.
Nearest metro station: La Latina

Santa Ana monastery, which was once on this site, was destroyed during the reign of Joseph Bonaparte (1808-13). Today the square is bordered by tapas bars and is the ideal place to participate in people watching.
The dramatist, Calderón de la Barca, is immortalised in statue form at the centre of the plaza whilst the Teatro Español stands at the east end. The current building was constructed in 1849 after the first, an open-air theatre, was burnt down.
Nearest metro station: Sol and Sevilla