The art galleries of Madrid come in various guises, with most being very inexpensive and centrally located, although often closed on Mondays. Housing the world's best collection of Spanish art, the Museo del Prado (Prado Museum) ranks amongst the city's greatest treasures and has become a National Monument. Now one of the top attractions in Madrid, this neoclassical building was completed in 1785 and was conceived by Charles III as a centre for studying natural sciences.

Other notable galleries in Madrid include the Museo Thyssen-Bornemisza (Thyssen-Bornemisza Museum), which is widely considered to house the second most important private collection in the world, after Queen Elizabeth II's. Also worth looking out for is the Museo Nacional Centro de Arte Reine Sofia (Queen Sophia's National Art Centre Museum), as well as the Real Academia de Bellas Artes de San Fernando (Royal Academy of Fine Arts). 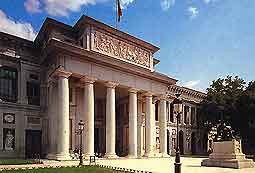 Address: Paseo del Prado
Tel: +34 91 420 36 62 / 37 68
After some damage in the Spanish Wars of Succession, this important building was subsequently restored and reopened as a museum in 1819, housing the royal collection of painting and sculptures. With one of the largest collections of art in the world, numbering over 7,000 paintings, at least 1,500 are on display at any one time. Amongst these are large numbers by famous artists Goya, Ruben, El Greco, Brueghels and Titian, to name but a few and some of the most well-known paintings are 'The Holy Family' by Raphael, 'The Garden of Delights' by Bosch and 'The Three Graces' by Rubens. The Museo del Prado is so vast that more than one visit is needed to fully appreciate the Prado.
Open hours: Tuesday to Saturday - 09:00 to 19:00 and Sunday - 09:00 to 14:00
Admission: charge, reasonably priced, free after 14:30 on Saturday and all Sunday
Nearest metro station: Banco de España
Nearest railway station: Atocha and Recoletos
Other nearby points of interest: Plaza de Cibeles and Museo Arqueológico Nacional

Address: Paseo del Prado, 8
Tel: +34 91 420 39 44
The art collection of Baron Heinrich Thyssen is quite exceptional. Thyssen decided to move his collection from Switzerland and although he received generous offers from many countries worldwide, being Spanish, he was keen to move it to Madrid. Housed in one of the city's most handsome buildings, the neoclassical Palacio de Villahermosa, there are both permanent and changing exhibitions in 51 rooms. With over 800 works of art on display, dating from the 17th, 18th and 19th centuries, by some of the world's most famous artists, such as Constable, Cranach, Holbein, Raphael, Rubins, Monet, Van Gogh, Cézanne and Picasso, this vast art gallery is well worth a visit. Paintings of particular interest are a portrait of Henry VIII by Holbein, 'The Lock' by Constable and 'Les Vessenots' by Van Gogh. There are also various sculptures, ceramics, jewellery and carved ivories.
Open hours: Tuesday to Sunday - 10:00 to 19:00
Admission: charge, modestly priced
Disabled facilities: first-rate
Nearest metro station: Banco de España
Nearest railway station: Atocha and Recoletos
Other nearby points of interest: Museo del Prado

Address: Calle Alfonso XII, 68
Tel: +34 91 420 26 28 / 06 70
The Casón del Buen Retiro was originally the ballroom of the Buen Retiro Royal Palace, which was destroyed by Napoleonic troops and subsequently rebuilt by Charles III. It now contains the Prado's 19th-century Spanish art collection and includes some fantastic portraits by Vicente López, such as Maria Cristina de Borbón, Isabel de Braganza and Fernando VII. Other paintings of interest include 'The Death of Viriato' by Jos de Madrazo, 'Las Presidentas' by Eugenio Lucas and 'The Countess of Vilches' by Federico de Madrazo, which is probably one of the most important portraits of the 19th century. There are also many beautiful landscape pictures and a ticket to the Prado Museum also allows entry in the Casón del Buen Retiro.
Open hours: Tuesday to Saturday - 09:00 to 19:00, Sunday - 09:00 to 14:00
Admission: charge, reasonably priced, free on Saturday and Sunday afternoons
Disabled facilities: very good
Nearest metro station: Retiro

Address: Calle Santa Isabel, 52
Tel: +34 91 467 50 62 / 51 61
This renovated 18th-century public hospital is simply huge and was opened as a centre for the arts in 1990. Since opening, its popularity has grown and it is now one of Europe's most vibrant centres for contemporary creativity. Over 3,000 paintings were acquired for the old Museum of contemporary Art and these form the backbone of the permanent collection, although only around 200 of these works are exhibited at any one time. Highlights include a Picasso room, a Dali room and a Surrealism room, all with wonderful displays of paintings, many of which are famous. There are also theatres with music, readings, lectures, courses and many other varied events. A café is available for refreshments.
Open hours: Wednesday to Monday - 10:00 to 21:00 and Sunday - 10:00 to 14:30
Admission: charge, reasonably priced, free Saturday afternoon and Sunday morning
Disabled facilities: very good
Nearest metro station: Atocha
Nearest railway station: Atocha

Address: Calle Alcalá, 13
Tel: +34 91 522 14 91
The proposal of a Royal Academy in the genre of those in the great cities such as Paris and Rome was by Francisco Meléndez. Authorised in 1744 by Felipe V the Academy was established in 1752 under Fernando VI. First located at Plaza Mayor, in the Casa de la Panaderia, the Royal Academy was to be moved to its present day setting in 1773 on the command of Carlos III. An often-disregarded gallery, the Royal Academy houses examples of work from many famous artists on its three floors, these include Magnasco, Murillo, Rubens, Van Dyck and Velázquez.
Open hours: Tuesday to Friday - 09:00 to 19:00 Saturday to Monday and public holidays - 09:00 to 14:30
Admission: charge, reasonably priced, free on Saturday and Sunday
Highlights: Goya self portraits and etchings, 'Head of John the Baptist' by Jusepe Ribera and Susana and the Elders by Rubens
Disabled facilities: good
Nearest metro station: Sol and Sevilla
Other nearby points of interest: Puerta del Sol, Convento de las Descalzas Reales

Address: Serrano, 122
Tel: +34 91 561 60 84
José Lázaro Galdiano was a private art lover who travelled the world, looking for treasure to add to his extensive collection. When he died in 1948, aged 80, he donated his large collection to the state and the museum was opened in 1951. The paintings are extremely varied and include works by many famous artists, amongst whom are Goya, Rembrandt, Murillo, Zurbarán and El Greco. Some of the most well-known paintings are 'The Virgin of Charity' by Caravaggio, 'Landscape' by Gainsborough and 'The Adoration of the Magi' by El Greco. There is also a display of exquisite gold and silver work, Russian enameling, jewellery and even some old weapons. Set in the grand three-storey Parque Florido Palace, the exhibition comprises one of the world's greatest private collections.
Open hours: Tuesday to Sunday - 10:00 to 14:00, August - closed
Admission: charge, reasonably priced
Disabled facilities: none
Nearest metro station: República Argentina / Nuñez de Balboa

Address: Calle Castelló, 77 / Calle Padilla, 36
Tel: +34 91 435 42 40
This is probably one of the most important private art foundations in the whole of Europe and features a large permanent art collection which consists mainly of contemporary Spanish art. Throughout the year there are also around 30 major art exhibitions, often focusing on major artists, such as Picasso.
Open hours: Monday to Saturday - 10:00 to 14:00 and 17:30 to 21:00, Sunday and public holidays - 10:00 to 14:00, closed August and between exhibitions
Admission: free
Disabled facilities: very good
Nearest metro station: Nuñez de Balbao