Getting Around, Aberdeen Travel, Transport and Car Rental 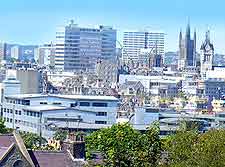 Transportation in and around Aberdeen is modern and efficient, with air, road and rail travel connections throughout the UK and Europe. The city can be easily explored by car, taxi or local bus transport, and for those holiday makers looking to travel around Aberdeenshire and the north of Scotland, a hire car is generally the most convenient way to reach your chosen destinations.

Most sites of interest nearby Aberdeen are just a short drive away and even the magnificent capital city of Edinburgh can be reached by road, being roughly a three-hour drive through some beautiful scenery. 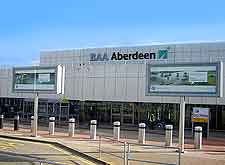 Address: Dyce, Aberdeen, Aberdeenshire, AB21 7DU, Scotland, UK
Tel: +44 870 040 0006
Aberdeen Airport lies to the north-west of the city, at nearby Dyce, being roughly 11 km / 7 miles from the city centre and next to the industrial estates of Kirkhall and Wellheads. This is a busy facility, with more than three million passenger throughputs annually. Its single terminal serves both chartered and scheduled flights from and to Europe, Ireland, the UK and a number of Mediterranean holiday destinations, as well as the nearby Shetland and Orkney islands.

All the usual shops, eateries, duty free outlets and other conveniences are found at the terminal, including car rental and two hotels. Onward transportation from the airport is by shuttle bus to the nearby Dyce rail station, by taxi to the city centre, or by hotel shuttles. 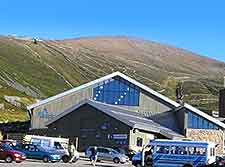 Car hire in Aberdeen can be arranged at the airport on arrival, booked in advance online, or organised at one of the many car rental offices in the centre, including the Arnold Clark Rental outlet on Canal Road. Driving in the city is straightforward and a hire car makes for easily arranged trips around Aberdeenshire and further afield, with the Balmoral Estate, Cruden Bay, Fyvie Castle and the Scottish Highlands all being within comfortable driving distance. Northerly destinations are connected by the A90 (Ellon Road) and the A96 (Great Northern Road), and locations to the south by the A956 (Wellington Road). 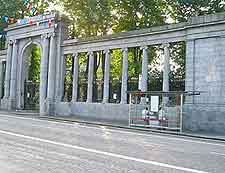 Local First Aberdeen buses serve the city and the nearby communities, providing an affordable way to get around. Tickets can be purchased as you board the bus by simply paying the driver, with day tickets providing the best value, allowing unlimited travel until midnight. 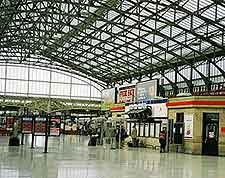 Aberdeen's train station is located in the centre, next to the bus station and the harbour, between South College Street and Market Street. Trains leave for Scotland's east coast and Edinburgh, and run on to London (seven hours and 30 minutes).

The ScotRail service joins all the major Scottish cities including Dundee (one hour and 15 minutes), Edinburgh (two hours and 30 minutes), Glasgow (just under three hours) and Inverness (two hours and 15 minutes), and includes a sleeper service to London. CrossCountry trains run to Manchester and Birmingham, while several routes stretch right down to Penzance in Cornwall, England's longest journey by train. Local connections to nearby small towns and villages, unfortunately, are rather thin on the ground. 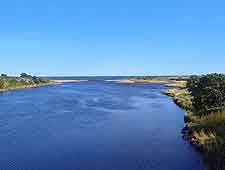 The city's harbour supports ferry services to the far northern islands of Orkney and Shetland, sailing to Kirkwall and Lerwick respectively. These routes provide a leisurely and scenic way to reach these distant islands, although many prefer to fly.

Taxi stands can be found scattered around the city centre and other main areas, such as the university, with the principal ranks sited at Market Street, Back Wynd, Union Street and the railway station. It can be tricky to hail a cab at night, as there is a shortage in the evening and many drivers will not pick up groups of men, but the service can be provided via a phone call. Fares are high, but local taxis are metered by law.