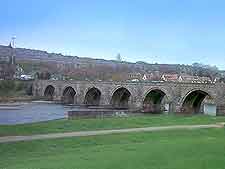 To discover Aberdeen's history, we need to journey back in time to 84 AD. This was when the Roman army, led by Julius Agricola, arrived in the area. Certainly, by the 10th century there was some sort of town here, because records show that it came under Danish attack. Today, this ancient settlement is known as the Old Town or Aulton.

The origins of Aberdeen's name are still the subject of debate. Some people believe that it derives from 'Aber' and 'da-aevin', meaning the 'mouth of two rivers'. The two rivers in question are the Dee and the Don. At this time, the town was also referred to as Aberdon. For the Romans, however, it was known as Devana.

It seems that by the 12th century, the town had developed from these early origins into a place called New Aberdeen, and it grew in size very quickly. By the end of the century, it had its own castle, stone church and mint. The latter ensured that Aberdeen was at the heart of coin production in Scotland. In the early years of the 13th century, King Alexander II granted the town's merchants the right to hold a market here every week, while a merchant's guild was also set up. Then, in 1273, the right to hold an annual fair was granted.


By the end of the 13th century, the town was much larger and had its own religious community, including the Carmelites, Dominicans and Trinitarians. Its inhabitants traded in fine wool clothing, spices and pottery. There were strong trading links with Germany and further afield. Aberdeen also became a major exporter of salmon. In 1495, Aberdeen also added education to its list of achievements. This was the year that King's College was founded by Bishop William Elphinstone. 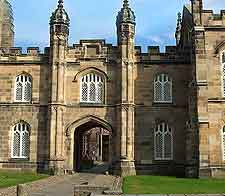 By 1639, in terms of size alone, Aberdeen was only outdone by one other place in Scotland - Edinburgh. Of course, there were various setbacks, including invasions by no fewer than five armies, all in the space of a decade. After the armies had done their worst, the town's population was further depleted by the arrival of the Black Death in 1646.

Such reversals in fortune have been a constant throughout Aberdeen's history. Each time, however, the town has recovered - and this was no exception. A more modern town started to emerge towards the end of the 18th century, although the extent of its development was still limited by its geography. Confined to an area within St. Katherine's Hill, it was unable to extend further west. Then, in 1796, an engineer and surveyor called Charles Abercrombie put forward an audacious plan - to build a viaduct over Denburn Valley and level the land on St. Katherine's Hill. 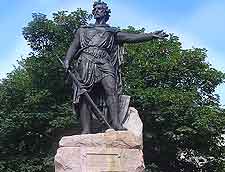 Engineering work started in 1801. In 1805, Abercrombie's plan finally became reality. A huge viaduct was built, which was supported by a series of granite arches. Named Union Street, it was soon joined by other viaducts, including the Union Terrace and Rosemount Viaduct. Such developments certainly succeeded in opening up Aberdeen to land in the west of the town. Unfortunately, the huge costs did little for the town's financial situation.

Throughout the Victorian era, Aberdeen shifted its focus more and more to fishing and shipbuilding. The latter reached its peak in the 1860s. A series of improvements to the harbour meant that by 1870, there were more than 200 fishing boats based here, mostly engaged in the herring trade. The year of 1891 saw city status arrive.

Whilst life in the city gradually improved during the 20th century, with the arrival of its parks, theatre and other recreational facilities, some elements of Aberdeen were in decline. These included some of its traditional industries, such as granite. Then, in 1969, the discovery of North Sea Oil came to the city's rescue. It led to the city becoming a major centre for offshore oil and gas, bringing quite considerable wealth and finally assuring a healthy future for the city.