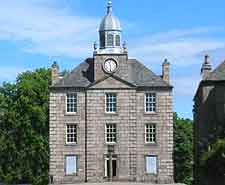 Edinburgh boasts the only airport in Scotland which receives more visitors than the hub serving Aberdeen, an oil-rich North Sea city called the 'Flower of Scotland' after its numerous gardens and parks. More than three million annual passengers presently use Aberdeen Airport, being joined by about 450,000 helicopter passengers. Most of the helicopter passengers departing from this air facility tend to work in the city's thriving offshore North Sea oil industry.

The separate terminal reserved for helicopter traffic is only open on weekdays, but the main passenger terminal welcomes passengers at all times and on all days of the week. The Check-In and Arrivals sections are conveniently situated next to each other on the ground floor.

The busiest of the dozens of direct routes to and from Scotland's fastest-growing airport are Amsterdam, Paris, Birmingham, three London airports and the Norwegian city of Stavanger. Aberdeen Airport is easy to reach by car or taxi along the A96 road, while the Dyce Railway Station is within close proximity, offering a plethora of rail and bus links.

Address: Dyce, Aberdeen, Aberdeenshire, AB21 7DU, Scotland, UK
Tel: +44 870 040 0006
Standing just 11 km / 7 miles north-west of the city centre, Aberdeen Airport is to be found alongside the A947 (Stoneywood Road) and Wellheads Drive, close to Central Park and to the east of the Kirkhill Forest. Ambitious expansion plans will see the complex extended to accommodate nearly six million passengers a year by 2030.

The A96 connects the airport with Aberdeen, with the drive into the city taking around 20 minutes. The A96 also connects the city with the likes of Inverness and Elgin, which sit to the north-west. Aberdeen's main thoroughfare, the A90, joins the A96 for Dundee and Edinburgh.

The two main bus operators in Aberdeenshire are First (FirstGroup), which travels throughout the city limits, and Stagecoach, which mainly travels outside Aberdeen's city limits. Stagecoach fares within the city limits are generally cheaper, but First buses run more often and the company has more bus stops. Both bus companies travel frequently from the airport to the city centre, with the journey taking from 20 to 30 minutes.

The airport is a brief taxi ride away from Dyce, which is home to the nearest rail station. Visitors can travel to both Inverness and Aberdeen from Dyce Station or travel throughout Scotland and the rest of the UK from Aberdeen Station, which is situated next to the city's main bus station and busy harbour. CrossCountry, ScotRail and East Coast are the three main rail service providers.

Tel: +44 01224 353 535
Taxis between the airport and the city centre may not be cheap, but they are readily available from ComCab, being collected from outside the main entrance. Disabled passengers can reserve wheelchair-accessible vehicles by telephone.