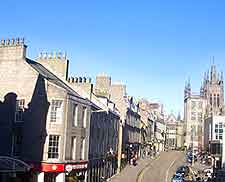 True to its new international focus as an oil boom town, every possible dining option can be found in Aberdeen. No matter what culinary mood you are in, there's an eatery here to suit. As well as fine dining, nouvelle cuisine, pub grub, fusion foods, local delicacies, Indian, Thai, Greek, Turkish, French, Italian and even Hungarian restaurants are all well represented in Aberdeen, together with the usual fast-food outlets.

Whether you eat in an upscale hang-out, a cosy pub or bar, an intimate bistro, or a chic eatery with a sea view, you will be well fed at a price that suits your pocket. 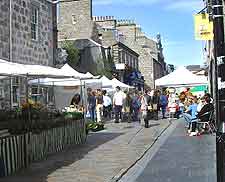 The coastal location of Aberdeen makes ultra-fresh local seafood one of the main ingredients in many restaurants, from upmarket joints to the familiar and traditional fish and chip shop.

Lobster, crab and fresh fish straight off the boat are all-time favourites. Haggis and many other traditional Scottish recipes are found everywhere and, in spite of certain reservations as to their content, most will agree that they are nothing short of delicious! 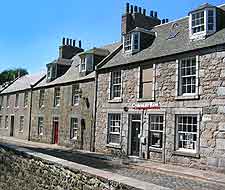 What to Eat, and Where

Traditional Scottish cuisine relies on fresh, seasonal ingredients, forest meats and seafood, with few spices or flavourings other than the combination of tastes from slow cooking enhanced by herbs.

This is a simple cuisine, suited to the country's colder clime and with only a slight influence from English dining or farther afield. Used as the basis of much Scottish cuisine, Scotch broth is considered to be healthy, although many restaurant dishes are often rich in fat.

Traditional meats favoured by restaurants in Aberdeen include venison, boar, deer and various fowl, cooked with root vegetables. Oatmeal plays an important part in local dining, being used to make porridge, oatcakes and for thickening stews and rich, warming soups. The much-maligned national dish, haggis, (ground-up offal and oatmeal stuffed into a sheep's stomach and boiled), may sound less than tasty, but served with a rich gravy, mashed tatties (potatoes) and neeps (swedes), and accompanied by fresh oatmeal griddle cakes dripping with butter, it is truly delicious. 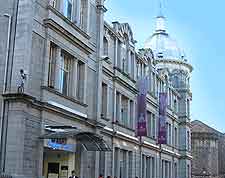 Any mention of Scottish dining in Aberdeen without a mention of the country's superb single malt whiskies would be a big mistake. Distilleries all over Scotland have their own versions of this famous spirit, provoking unending arguments amongst aficionados about which one is the best. The truth is they all are!

When planning an evening out in Aberdeen, there are literally hundreds of restaurants to choose between. The best and most accessible dining establishments are located on roads such as Belmont Street, Bridge Street, Broad Street, King Street, Market Street and Union Street.