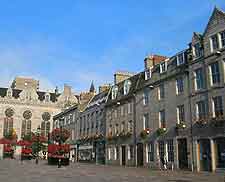 Unsurprisingly, many Aberdeen festivals and Scottish events centre around traditional local activities, Scottish sports and the agricultural calendar. Every region hosts its annual Highland Games, with rituals such as tossing the caber being quite familiar to many visitors.

The wearing of the kilt and the skirl of the bagpipes are mandatory on these much-loved occasions, and so you can expect to see plenty of tartan accompanied by authentic Scottish piping. Traditional Scottish sword dancing is also worth looking out for and is again often paired with the playing of bagpipes.

Several annual festivals and seasonal things to do around Aberdeen date back a thousand years or more to rituals remembered from pagan times, and towns involved in the distillery business hold annual festivals to celebrate their own specific brand of malt whisky. At these events, tasting is a must and falling over an option!