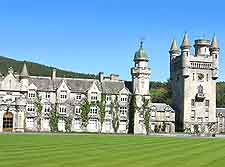 Scotland is an ideal country for touring, with some spectacular and varied scenery being within reach of Aberdeen. On the agenda are day trips to historic cities and towns, nature parks, mountains and related recreational attractions, wild seacoasts and myriads of outdoor activities - from skiing in winter to golf, hiking, mountaineering, gliding and much more.

Except for the wild country in the depths of a snowy winter, it is easy to drive to the many attractions surrounding Aberdeen, and day trips and longer excursions can be easily planned to take in each region. Tours around the ancient castles in Aberdeenshire or the ultimate luxury of a ride on the Orient Express Northern Belle make for memorable trips, and if you've not been to Edinburgh, you haven't truly seen Scotland. You can also choose between a visit to Balmoral Castle, the Cairngorms National Park, Cruden Bay and many other nearby tourist destinations. 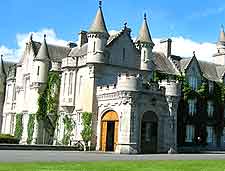 Address: Cairngorms National Park, Balmoral, Aberdeen, Scotland, UK
Tel: +44 01339 742 334
Located roughly 80 km / 50 miles to the west of Aberdeen and close to Ballater, the Royal Estate of Balmoral is the private property of the Queen of England and an integral part of both British and Scottish history. Set within the Cairngorms National Park, the estate was bought by Queen Victoria in 1852 for £30,000. The present castle dates from the time of the purchase and was built on the orders of Prince Albert, while the ancient original castle ruins are from the 14th century. Often referred to as the summer holiday home of the Royal family, the Balmoral Estate is open to the general public, although the crowds of visitors are restricted to the castle ballroom and the grounds, with audio tours being available. Close by is the Lochnargar mountain, which towers at more than 1,150 metres / 3,775 feet high.
Open hours: daily - 10:00 to 17:00
Admission: charge 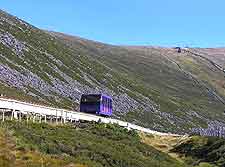 Address: Near Aberdeen, Scotland, UK
The spectacular landscape of the Cairngorm Mountains begins not far inland from Aberdeen, lying directly to the west and beginning just past Aboyne and Birsemore. Established in 2003 and covering a vast area of more than 4,500 square kilometres / 1,737 square miles, this national park, one of the largest and highest in the UK, is a protected development area where responsible tourism is encouraged. Its peaks, moors, rivers, lochs and forests are home to many native species of animal. Various walking trails head up the hills and mountains, providing scenic views along the way, although the easiest way to see the attractions here is by taking the Cairngorm Mountain Railway, which heads up to the Cairngorm plateau. Next to the Royal Deeside area, the Glen Tanar Estate is a particular highlight in the Cairngorms and offers many fun outdoor activities.
Open hours: daily
Admission: free 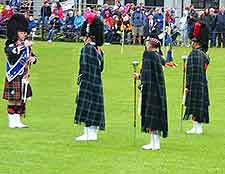 Address: Aboyne, Royal Deeside, Scotland, UK
Home to the famous Highland Games, the pretty town of Aboyne lies between the North Sea and the Cairngorms National Park, being surrounded by small villages and beautiful countryside. Salmon fishing in the River Dee is a popular sport here and several nature reserves are close by. Scotland's turbulent and colourful clan history is evident in a number of important battle sites around Aboyne.

For a real treat and a great way to see the glorious Scottish Highlands, a journey on the luxury Orient Express Northern Belle is a simply unforgettable experience. Loch Lomond, Oban, Mull, the Kyle of Lochalsh and the Isle of Skye are all served by the picturesque West Highland route from Aberdeen's train station. Day trips or full weekend breaks are available and include fine dining with champagne on the train, as well as guided tours to the principal attractions and sights.
Open hours: hours vary according to train timetable
Admission: charge 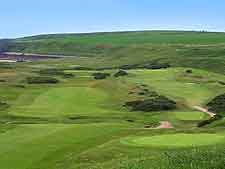 Sited roughly 38 km / 24 miles to the north, this charming fishing village sits on a bay of the same name, where it is overlooked by Slaides Castle. This village dates back a thousand years and the now ruined castle was the residence of the Earls of Errol. The rocky coastline away from the beach has high cliffs and spectacular views, and there are several golf courses in the area. Cruden Bay is easy to reach via the A90 and sits between Longhaven and Whinnyfold. 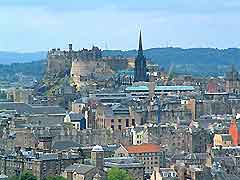 The magnificent city of Edinburgh, watched over by Edinburgh Castle on its massive rock, has been a famous visitor destination for many years. Occupied since the Bronze Age, the city's proud history and heritage shines out from its architectural gems, its museums and its monuments. As the Scottish capital, Edinburgh is packed with attractions and sightseeing opportunities, although at 203 km / 127 miles to the south-west of Aberdeen, this city is a little to far to make a day trip possible and is more suitable for a longer weekend break excursion.

Dining and shopping here are second to none, and the annual summer Edinburgh Festival draws literally millions of visitors every year. Tourists will enjoy exploring the Royal Yacht Britannia, strolling along the Royal Mile, checking out the Scottish Parliament Building, visiting the Museum of Scotland, and spending an afternoon at the Royal Botanic Garden. If you have the time, be sure to visit the outlying Rosslyn Chapel (Rosslyn Chapel) and try your hand at deciphering the Da Vinci Code. 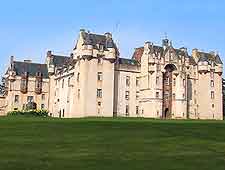 Address: Turriff, Aberdeen, Scotland, UK
Tel: +44 01651 891 266
In a spectacular setting on the banks of the River Fyvie, surrounded by enshrouding forests and a wide loch stands haunted Fyvie Castle, the ancient home to the Lairds of Fyvie. Now a National Trust property, this superb 800-year old Baronial fortress boasts medieval sections and a fine Edwardian interior. Noteworthy past guests here have included Robert the Bruce, Charles I and Edward I of England. An extra bonus is the rich art collection housed here, including works by Gainsborough. Connected by regular buses, Fyvie Castle is to be found some 40 km / 25 miles to the north of Aberdeen and is particularly famous for its ghosts, one of which has been named the Green Lady.
Open hours: April to June, Saturday to Tuesday - 12:00 to 17:00; July and August, daily - 11:00 to 17:00; September and October - Saturday to Tuesday - 12:00 to 17:00
Admission: charge 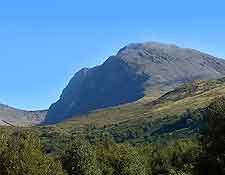 The Highlands and Islands

A visit to Scotland would be incomplete without an excursion north to the wild, breathtaking and remote Scottish Highlands, perhaps including a boat trip to the islands off the rugged northern coastline. For birders, this is a dream destination, with every habitat from sea cliff to tundra. During the winter season, the mountains are a paradise for winter sports, while for those seeking solitary peace and quiet, the Highlands and Islands are a haven.

Address: South Road, Oldmeldrum, Aberdeen, Scotland, UK
Tel: +44 01651 872 968
Close to the Inverurie Train Station and just 27 km / 17 miles to the north-west of the city, being set at the front of the Meldrum Arms Hotel, is this charming old statue of a mariner, brought from France by the then owner of the hotel. Of note, the hotel itself is now a listed structure, as is the statue. The previous history of the statue is unknown and something of a mystery. 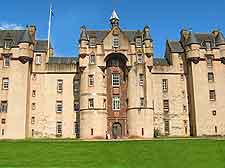 Address: Near Aberdeen, Scotland, UK
Tel: +44 01330 833 463
Just 26 km / 16 miles to the west, next to both Craigearn and Lauchintilly, this stark castle, in the form of a Baronial tower house, was formerly the headquarters and residence of the Lairds of the Fraser clan, one of the most powerful Scots clans ever. Built in the 16th century in a similar format to Glamis Castle, Castle Fraser dominates the 142 hectares / 350 acres of grounds surrounding its massive construction. Castle Fraser ranks amongst the finest and largest in Scotland and as with so many Scottish castles, is, of course, haunted.
Open hours: April to June, Thursday to Sunday - 12:00 to 17:00, July and August, daily 11:00 to 17:00, September and October, Thursday to Sunday - 12:00 to 17:00
Admission: charge 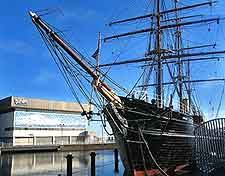 Comfortably under two hours from Aberdeen and roughly 104 km / 65 miles to the south-west, the city of Dundee comes with many excellent tourist attractions and places of interest. The City Square forms the very heart of Dundee and is home to the Caird Hall and a bronze statue of the city's famous comic character, Desperate Dan. Within the Cultural Quarter, the Dundee Contemporary Arts galleries showcase Scottish contemporary art and feature the chance to watch artists at work. Also in Dundee and worth looking out for is the Discovery Point with Captain Scott's RRS Discovery ship, the HM Frigate Unicorn at the Victoria Dock, the Verdant Works industrial museum, the McManus Galleries, and the Dundee Law hill, where you can enjoy uninterrupted views of the Tay bridges. 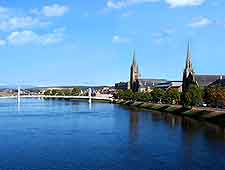 A major tourist destination in the Scottish Highlands, the city of Inverness is around 166 km / 104 miles to the west of Aberdeen and is just about close enough for a day trip to be possible, particularly if you are prepared to leave early in the morning. Inverness is something of a gateway to Loch Ness, which draws thousands of visitors each week, coming here in the hope of spotting the loch's famous monster. The Loch Ness 2000 Monster Exhibition is a good place to visit if you are interested in learning more about the many expeditions to find Nessie. In the city itself, attractions include the turreted architecture of Inverness Castle, the Inverness Museum and Art Gallery, the Ness Islands, St. Andrew's Cathedral and the indoor Victorian Market shopping mall.

A convenient base to explore both the Highlands and the Lowlands, the city of Stirling is 196 km / 122 miles to the south-west of Aberdeen. The Stirling area boasts a surprisingly high number of historic battlefields and offers endless countryside walks, which are at their best around the neighbouring Trossachs National Park and Loch Lomond. Sightseers should pay a visit to Stirling Castle and Argyll's Holding, the Bannockburn Heritage Centre and the Old Town, where historical architecture abounds in the form of the Tolbooth, Cowane's Hospital and the Church of the Holy Rude.