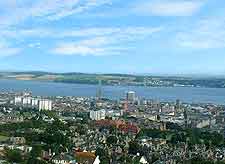 The Scottish port city of Dundee lies along the Firth of Tay, on the country's north-eastern coast. Its harbour and shipbuilding industry is linked with the city's fame as a centre for scientific activities and the building of Scott of the Antarctic's exploration vessel, the RRS Discovery, today berthed in the harbour. Now a centre for tourism, Dundee is central for Scotland's three major cities, Aberdeen, Glasgow and magnificent Edinburgh, as well as boasting many attractions of its own.

Dundee is also close to St. Andrews, the university town world-famous for its championship golf course and home of the sport's ruling body, the Royal and Ancient (R&A). 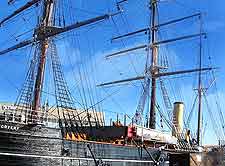 The breathtaking Highlands and Glens are a comfortable drive from Dundee by car, and the city is known for its culture, fine dining and great shopping facilities, as well as its lively Scottish pubs in the Nethergate, West End and West Port areas.

Historically based guided walking tours give visitors a glimpse into Dundee's colourful and often bloody past. A helpful orientation and tourist information centre is found on Castle Street, close to the Caird Hall and the City Square - where a prominent statue of Desperate Dan resides, celebrating the history of The Dandy comic, printed here ever since the 1930s. 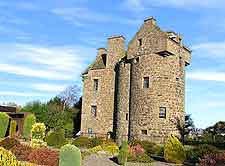 With such a long and interesting history, the city of Dundee has plenty to keep tourists fully occupied for the duration of their holiday, come rain or shine. Most people head straight for the Discovery Quay, to admire and explore the three-masted RRS Discovery ship, before heading to the Victoria Dock to check out the historic warship named the HM Frigate Unicorn. The 16th-century Claypotts Castle lies within the West Ferry area and is worth a look if you are in this part of Dundee, although it can only be viewed from the outside. 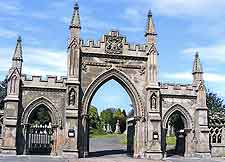 Families on holiday in Dundee have a few options to consider. Located on the easterly outskirts of the city, Broughty Ferry is a traditional seaside suburb with a lengthy sandy beachfront and its very own 15th-century castle, which was built to defend the entrance of the Firth of Tay. On the north-westerly side of the city and lying between the Downfield and Camperdown golf clubs, the Camperdown Country Park is the city's biggest public park and features a wildlife centre with modern zoo attractions, an adventure playground, and nature trails around the adjacent Templeton Woods and Clatto Reservoir, as well as a leisure park with a multi-screen cinema complex and an ice-skating rink within its Ice Arena. More information about Dundee Tourist Attractions. 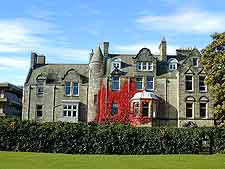 Located on the High Street, the listed mid-19th century St. Paul's Episcopal Cathedral is one of the most obvious landmarks in Dundee, with its epic towering spire dominating the architecture. In the Nethergate area, the medieval St. Mary's Tower is considerably older, dating all the way back to the 1480s, although the adjoining church is somewhat younger and has been remodelled several times over the centuries, mainly due to fire damage.

For some of the best available views across Dundee, a climb up Law Hill is in order. This prominent hill actually has volcanic origins and is topped by a War Memorial, lit on specific days with a huge flame to commemorate events such as Armistice Day, the Battle of Loos and United Nations Day. Crowning Balgay Hill, the Mills Observatory sits within Balgay Park, on the western side of Dundee and between Lochee Park and Victoria Park, and comes with its own planetarium. Other more sombre landmarks include the Black Watch Memorial and the Howff Burial Ground, the latter of which came into being after Mary Queen of Scots gifted the land to the city in 1564. More information about Dundee Landmarks and Monuments. 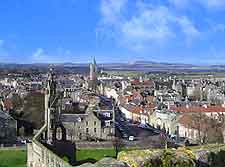 The history of north-eastern Scotland is recorded and showcased at the city's museums, with the Discovery Point Museum containing lots of information about the RRS Discovery and the life and achievements of renowned Antarctic explorer Captain Robert Falcon Scott himself. Situated within a former jute mill, the Verdant Works provides an insight into the industrial period of the Victorians and has an array of original machinery in perfect working order. The University of Dundee contains a selection of very reasonable cultural offerings, such as the D'Arcy Thompson Museum of Zoology, the Lamb Gallery and the Tower Foyer, while for families, the Sensation Dundee science centre and its wealth of interactive fun will be sure to please all ages. Close by, further museums are to be found at the village of Glamis (Angus Folk), the coastal resort town of Montrose (Air Station Heritage Centre) and St. Andrews (British Golf). More information about Dundee Museums and Dundee Art Galleries. 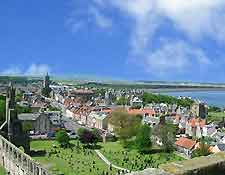 Within driving distance of Dundee are some of the biggest attractions in the whole of Scotland. The capital city, Edinburgh, is approximately one and a half hours away by car and is perfect for a day trip or weekend break, with its castle, endless museums and famed summer Fringe Festival, when the city is simply flooded with visitors. Other enticing Scottish cities in the vicinity of Dundee include Aberdeen, Glasgow and Stirling, each of which has so much to offer that you will need to plan any visit carefully, with an early start being strongly advised. There are also a number of neighbouring towns comfortably less than an hour away, such as Arbroath, Brechin, Forfar, Kirriemuir and Perth, as well as the villages of Aberlemno, Edzell and others. A selection of specific attractions are within close proximity and may appeal to day trippers, including the likes of the Caledonian Steam Railway, the Five Glens of Angus, Glamis Castle and Scone Palace. More information about Dundee Attractions Nearby.