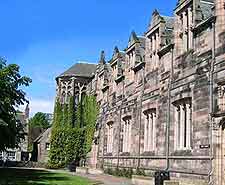 The most significant landmark in Aberdeen is surely the glorious late 15th-century King's College building, a monument to the importance of the city as an early seat of learning. St. Machar's Cathedral is another landmark of note, as is St. Nicholas Church, the Salvation Army Citadel and the Torry Battery.

The Baronial clan castles surrounding the city of Aberdeen attest to the ancient social structure of Scotland, with the modern version of clan pride as important today as the medieval tradition of loyalty was in its time. Union Street and Union Square serve as monuments to the 19th-century energy and prosperity of the city, continued today in the oil boom. 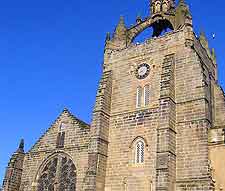 Address: Aberdeen University, College Bounds, Aberdeen, Scotland, UK
Tel: +44 01224 272 660
Set within the university campus in Old Aberdeen, the medieval King's College was founded in 1495. The focal point of this magnificent building is its King's College Chapel, which can be easily spotted by its crowning spire. Other interesting features include a series of stained-glass windows, some ornate choir stalls and a historic quadrangle, entered by way of a fine gatehouse. The Cromwell Tower, constructed in the middle of the 17th century, is still used as an observatory. In 1991, the university library was transformed into the King's College Conference Centre and in 2002 played host to the Scottish Parliament, when it was attended by Queen Elizabeth II. Close by, a Visitor Centre provides information relating to the history of the college and university.
Open hours: Monday to Friday - 09:00 to 16:30; King's College Visitor Centre, Monday to Saturday - 10:00 to 17:00, Sunday - 14:00 to 17:00
Admission: free 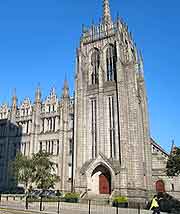 Address: Broad Street, Aberdeen, Scotland, UK
Tel: +44 01224 274 301
The magnificent Marischal College is the world's second-largest granite building. It was founded in 1593 by Earl Marischal of Dunnottar as a Protestant college to balance the Catholic King's College at the university. Construction of the present building was started in 1837, while in 1860 it was merged with the King's College, forming the city's university. Various additions were completed by 1906, including its distinctive Perpendicular Gothic granite facade. The Marischal Museum attraction is located onsite, being founded as long ago as 1786 and housing an assortment of local Scottish artefacts.
Open hours: Monday to Wednesday, Friday and Sunday - 10:00 to 17:00
Admission: free 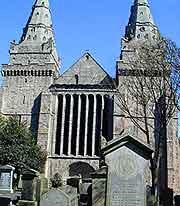 Address: 18 Chanonry, Aberdeen, Scotland, UK
Tel: +44 01224 485 988
Believed to have been built on the site of a tiny chapel erected by the saint himself, the present cathedral dates from 1378, although was not actually completed in its entirety until 1552. Its west front has imposing towers and 16th-century sandstone spires. The interior contains a particularly interesting painted wooden ceiling, also dating from the early part of the 16th century, and shows almost 50 different coats of arms of the local dignitaries.
Open hours: April to October, Monday to Saturday - 09:00 to 17:00; November to March, Monday to Saturday - 10:00 to 16:00
Admission: free 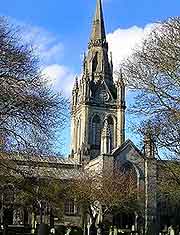 Address: Back Wynd, George Street, Aberdeen, Scotland, UK
Tel: +44 01224 872 820
Better known as West Church (West Kirk) and East Church (East Kirk) due to its division into two individual sanctuaries during the reformation, this stunning building holds a fascinating history and stands on the northerly side of Union Street, just minutes from the historic Castlegate area. St. John's Chapel forms the oldest part of the church and dates back to the 12th century, although much of this current incarnation was modelled in the 15th century, when the existing church was greatly enlarged. The 18th-century Renaissance West Church's interior holds fine wood carvings and rare wool tapestries. Beneath the East Church lies the 15th-century St. Mary's Chapel crypt, used to imprison witches in the 17th century.
Open hours: daily, Sunday morning worship in the West Kirk at 11:00
Admission: free, donations welcomes, volunteer guides available 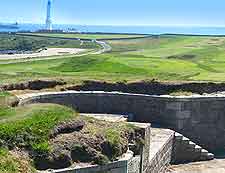 Address: Torry, Aberdeen, Scotland, UK
This reputedly haunted defensive structure was built in 1860 at a time when the French were strengthening their navy and war was feared. Its cannons formed the main defence for Aberdeen and its harbour, and much of the structure is still standing today. Now a scheduled ancient monument and last used for defensive purposes during the Second World War, the Torry Battery enjoys breathtaking views across the North Sea. Nearby places of interest include the 12th-century ruins of St. Fittick's Church and a lighthouse designed by famous Scottish civil engineer Robert Stevenson.
Open hours: daily
Admission: free 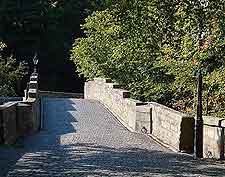 Address: Brig o' Balgownie, Aberdeen, Scotland, UK
Brig o' Balgownie was a tiny hamlet in the 14th century, incorporated later into Old Aberdeen as the city expanded. Nowadays, it is one of the remnants of north-east Scotland's ancient past, almost unchanged until the oil boom. A conservation area and a monument to the city's history, its tiny cobbled streets and stone houses still enchant, being reached by a stroll through Seaton Park. The namesake Brig o' Balgownie (Bridge of Don) is the principal landmark here and spans the River Don, where it dates back some 700 years and features a single Gothic-style arch.
Open hours: daily
Admission: free

Address: Aberdeen, Scotland, UK
This ancient seven-span bridge across the River Dee was commissioned by Aberdeen's Bishop Dunbar in the early 16th century to span the southern boundary of the city. Building commenced in 1520 and its seven semi-circular arches were complete by 1527, with the bridge now ranking as a listed Scheduled Monument. Decorations carved into its stonework include inscriptions and coats of arms. Of interest, in 1639 the Brig 'o Dee became the site of a battle between the Covenanters (led by Earl Marischal and the Marquess of Montrose) and the Royalists (led by Viscount Aboyne).
Open hours: daily
Admission: free 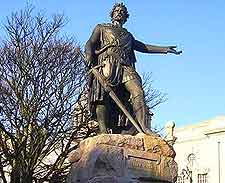 Address: Union Terrace Gardens / Rosemount Viaduct, Aberdeen, Scotland, UK
The fine bronze statue of Scots hero Sir William Wallace (1272 to 1305) is set in front of His Majesty's Theatre on a massive white stone plinth. Erected in 1888, the statue commemorates the life of this great man and the part he played in leading the Wars of Scottish Independence. As well as the sacrifice of his life for his beloved land, Sir William was actually executed by the English in 1305 for his part in an unsuccessful uprising against the English crown, although he remains an especially famous figure in Scotland's history, being brought to the attention of the world in Mel Gibson's 1995 movie blockbuster entitled Braveheart.
Open hours: daily
Admission: free 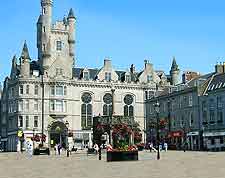 Address: 28 Castle Street, Aberdeen, Scotland, UK
Tel: +44 01224 579370
Inspired by the architecture of Balmoral Castle, the Salvation Army Citadel is located on the eastern end of Union Street, within the Castlegate area and on the corner of Castle Street and Castle Terrace. The granite architecture remains in good order and displays an obvious Baronial-style facade. Regular services are held at this religious place of worship, with the main services taking place each Sunday at 10:15 and again at 11:45.
Open hours: daily
Admission: free