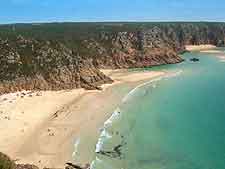 The town of Penzance is known all over England for its far south-westerly location in Cornwall and offers a true mixture of appealing sights and scenery. For some, Penzance is a great seaside resort, with stunning beaches and waterfront attractions, while for ferry passengers, Penzance is simply a convenient place to stopover for a night or two. Penzance really does have a lot to offer and is a great place for a summer holiday, with a well-developed tourism infrastructure and plenty of opportunities for exciting watersports, such as both windsurfing and scuba diving.

Penzance has become the commercial centre of the Penwith district and is home to the biggest fishing fleet in the whole of Cornwall and a recently built pier. Famous for its stunning coastline and neighbouring sandy beaches, each summer the beaches around Penzance become the perfect place to spend your day. The town's main beach lies between the harbour and Marazion, with many places of interest lining much of the waterfront along the way. Be sure to visit the Penzance Tourist Information Centre upon your arrival, which is located along Station Road, and ensure that get the most out of your visit here.

The most visited tourist attractions in the Penzance area include Land's End - England's most westerly spot and close to Penzance, now home to the Legendary Land's End theme park; British International Helicopters - an exciting way to travel from Penzance to the nearby Isles of Scilly; Levant Mine and Steam Engine - owned by the National Trust and featuring Cornwall's oldest beam engine; and the Geevor Tin Mine - one of the best preserved mines in the whole of Cornwall, with a host of mining memorabilia and guided tours. More information about Penzance Tourist Attractions.

A number of superb gardens lie in and around Penzance, including the Penlee Memorial Gardens - close to the town's beachfront and offering an important green space in central Penzance; the Morrab Subtropical Gardens - dating back more than 150 years and featuring an impressive collection of subtropical plants; the Trewidden Garden - known for its stunning collection of flowering plants, including both azaleas and camellias; and also the Trengwainton Gardens - a National Trust attraction with stunning views and many colourful exotics. 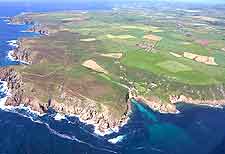 Important landmarks popular with tourists visiting Penzance include St. Michael's Mount - one of the most eye-catching landmarks in the county, connected by a narrow causeway and boasting a 12th-century fortress at the very top of the rocky island; the Minack Theatre and Visitor Centre - a rather breathtaking amphitheatre sited on the side of a tall cliff, overlooking the coastline; and the Penzance promenade - dating back to the 1840s and the perfect place for a seaside stroll, standing alongside the waters of Mount's Bay. More information about Penzance Landmarks.

Amongst the best museums and galleries available in Penzance are the Porthcurno Telegraph Museum - a noteworthy museum with a host of historic information about nearby Porthcurno village; and the Penlee House Gallery and Museum - one of the most visited attractions in Penzance, with works of art from the Newlyn School of Painting and many changing exhibitions. More information about Penzance Museums and Penzance Art Galleries. 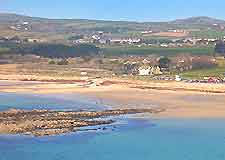 Tourist attractions just a short drive from Penzance include many appealing destinations, such as the Granite Coast Walk - a circular walking trail with many panoramic views and vantage points; Mousehole - a scenic fishing village where the fish-based 'Starry Gazey Pie' has become a local speciality; St. Ives - a lively coastal town located to the north of Penzance, with a thriving arts scene; and Helston - east of Penzance and the official gateway to the spreading Lizard Peninsula, with the Flambards Experience theme park being especially popular here. More information about Penzance Attractions Nearby. 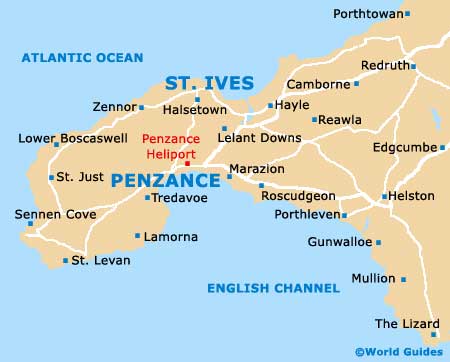