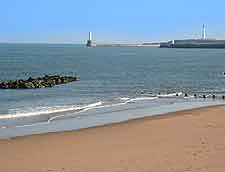 By wandering the cobbled streets of Old Aberdeen, the ancient district surrounding the university, historic attractions will transport tourists back hundreds of years, to a Scotland whose heritage is still evident in today's modern world. 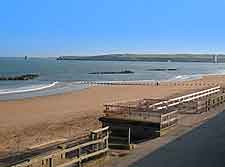 Address: Aberdeen, Scotland, UK
Aberdeen Beach is located roughly ten minutes to the north-east of the city centre and provides a surprising contrast to the plentiful historic architecture of the Old Town and Castlegate. Stretching for approximately 2 km / 1.5 miles, this sandy beach lies between the mouths of the River Don and the River Dee. In its heyday, the beach was central to a thriving seaside resort, although its popularity has somewhat waned over the years, in favour of cheap package holidays abroad. Nonetheless, on a sunny day, this beach still manages to draw the crowds, with its family orientated seaside attractions including Codona's Amusement Park and its funfair rides, the indoor arcade games and dodgems at Sunset Boulevard, and the very hands-on Satrosphere Science Centre.
Open hours: daily
Admission: free 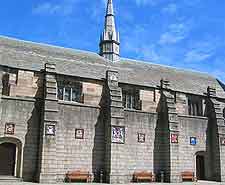 Address: Aberdeen, Scotland, UK
Old Aberdeen became a Royal Burgh in the 14th century, with its university founded at the end of the 15th, although sightseers should note that the Castlegate area (at the eastern end of Union Street) is an even older part of the city.

The cobbled streets of this historic quarter lie roughly 1.5 km / 1 mile to the north of the city centre and contain many of the essential visitor sights, in addition to the magnificent university buildings themselves. Everything here can be comfortably visited on foot, with the principal attractions including the King's College Chapel, the King's College Visitor Centre, the Old Town House, St. Machar's Cathedral, the Powis Gates, the Cruickshank Botanic Gardens and Seaton Park.
Open hours: daily
Admission: free 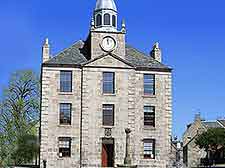 Address: High Street, Aberdeen, Scotland, UK
Tel: +44 01224 522 637
Built in the latter part of the 18th century, the Old Town House was, and still is, the gateway into Old Aberdeen. Meetings of the Burgh Council were held here, criminals were imprisoned and tolls were collected . The town market was held in its courtyard and local merchants' associations, including the Masonic Lodge, met here. In recent years, the city's university has restored the Old Town House to its former glory, with help from the Heritage Lottery Fund, allowing it to regain its former status.
Open hours: Monday to Saturday - 09:00 to 17:00
Admission: free 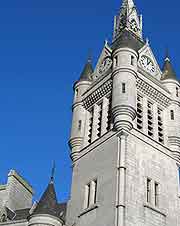 Address: Castle Street, Aberdeen, Scotland, UK
Tel: +44 01224 523 653
The early 14th-century Castlegate Tolbooth Tower is all that remains of the castle that once protected the town and is the oldest building in the entire city. Formerly the Town Hall and Town Jail, the tower and gate were linked to the now destroyed walls enclosing the town. 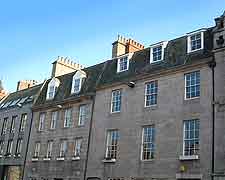 Address: Union Street, Aberdeen, Scotland, UK
The broad swathe of Union Street running through the heart of Aberdeen was built during the Georgian period in the early 19th century, nearly bankrupting the city's treasury. A mile in length, Union Street was, and still is, an immensely impressive entrance to the city from the south. Arches carry the street over Putachieside, with the Denburn Valley being crossed by a further series of arches. Shops of all kinds and malls crowd the high concentration of old terraced Victorian granite buildings.
Open hours: daily
Admission: free 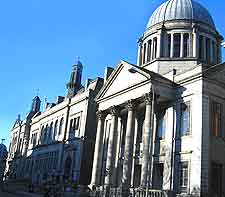 Address: Rosemount Viaduct, Aberdeen, Scotland, UK
Tel: +44 01224 641 122
The dome of this ornate granite Edwardian theatre is clearly visible all across the city and is a monument to the importance of culture in Aberdeen. Serving as the biggest theatre in the whole of north-eastern Scotland, His Majesty's Theatre opened in 1906 and was designed with special attention to its acoustics, which are still some of the best in any UK theatre today. Plays, operas and musicals are regularly performed here by the national arts companies of Scotland, attracting audiences of up to 1,400 people. In 1999, a lottery grant enabled a major refurbishment project to be carried out, as well as the addition of a new box office and restaurant.
Open hours: hours vary according to performance
Admission: charge 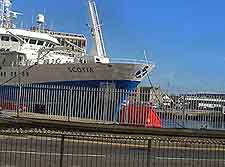 Address: Aberdeen, Scotland, UK
The city is home to a bustling working harbour, which can be a hive of activity and is often filled with ships heading to the outlying oil rigs and installations. Whilst the harbour does not come with a cluster of tourist attractions as such, this can prove to be an interesting place to hang out, particularly if you are prepared for an early start and able to visit the Albert Basin. A daily fish market has been held here from dawn until 08:00 for literally hundreds of years. Overlooking the harbourfront, the Maritime Museum offers an insight into the oil and petroleum industry.
Open hours: daily
Admission: free 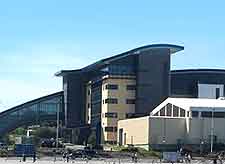 Address: Bridge of Don, Aberdeen, AB23 8BL, Scotland, UK
Tel: +44 01224 824 824
A large complex comprising extensive conference facilities and its very own hotel, the Aberdeen Exhibition and Conference Centre is capable of accommodating more than 8,000 people, depending on the layout. Regularly hosting all manner of events, including rock concerts (which in the past have included the likes of Oasis and Status Quo), wrestling, ice-skating, professional darts and snooker championships, and live entertainment (such as the X Factor and Britain's Got Talent tours), the AECC is located on the northern side of the city, between the Bridge of Don Industrial Estate and the Royal Golf Club.
Open hours: hours vary according to performance and events
Admission: charge 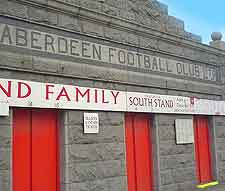 Address: Pittodrie Street, Aberdeen, Scotland, UK
Tel: +44 01224 650 400
Just a short distance to the north of the city centre and close to the university campus, the Pittodrie Stadium is one of Scotland's largest stadiums. Founded at the very end of the 19th century, the stadium functions as the home ground of the Scottish Premier League and the Aberdeen Football Club. The Pittodrie is able to seat just over 22,000 spectators and as well as hosting football matches, is also used as a venue for Rugby Union games and even the occasional concert, with past performers including Rod Stewart and Elton John. Conference facilities are also to be found onsite, along with a club shop selling soccer-related goodies.
Open hours: hours vary according to football match / event
Admission: free