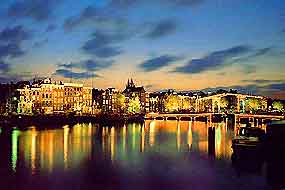 Amsterdam is one of Europe's most popular destinations and offers a diverse selection of tourist attractions, ranging from rich cultural heritage which includes world-famous museums containing the works of Rembrandt and Van Gogh, and 17th- and 18th-century gabled houses that line the waterways, through to the house where Anne Frank hid during World War II, and the infamous Amsterdam red light district. There are several tourism and tourist information offices situated in the city centre of Amsterdam and these provide up-to-date travel advice, brochures and more.

Amsterdam does not cover a large area, and this combined with flatness, makes it ideal to explore on foot. Visitors to this friendly Dutch city will find that there is a good selection of hotels, Amsterdam apartments available, offering one- to five-star accommodation and including many of the best hotel chains. City breaks are available across the full spectrum, with five-star hotels providing the ultimate in luxury and high-class amenities, whilst one-star hotels are plain, but nonetheless comfortable. Anything less than one star is referred to as a pension or guest house. All of the accommodation options in the city centre are within easy walking distance of many of the most popular points of interest.

Canals are an integral part of the city and the heart of the old city consists of canals, punctuated with narrow, picturesque streets. Amsterdam also has an abundance of historical tourist attractions that share street space with contemporary art galleries and street markets. More information about Amsterdam Tourist Attractions.

The cosmopolitan city of Amsterdam is ranked as Europe's fourth most important tourist centre after Paris, London and Rome and is visited each year by over two million foreigners as well as a similar number of Dutch. Although the majority of visitors come here to enjoy the architectural beauty and outstanding tourist sights, monuments, museums and art galleries, the city is also an important venue for business conferences and international conventions. Some 16,000 businesses have their headquarters in Amsterdam, which is also home to a concentration of insurance companies and major banks, and is the centre of the motor trade in the Netherlands, as well as being of major importance in the sale and processing of diamonds.

Amsterdam is the capital city of the Netherlands, but it is not the seat of government, although it is undoubtedly the focal point of activity in the country and is a modern metropolis with the advantage of being just 15 kilometres (9.5 miles) from Schiphol Airport, the fourth largest airport in Europe. Both rail and road give good connections from the airport to the city centre. Centraal Station, Amsterdam's train and bus station, lies in the heart of this popular Dutch city, providing links with many other European countries. Besides being easily accessible by air and train, Amsterdam is also close to the continental motorway network and is a major port used by ocean-going liners.