Getting Around, Genoa Travel, Transport and Car Rental 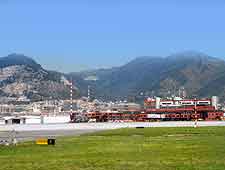 The best way to get around central Genoa is on foot. This is partly because many of the Old Town's narrow streets are not open to transport, and partly because of traffic congestion. A combined museum and public transport ticket is available and makes good sense if you're planning to travel between a number of Genoa's attractions.

A car is undoubtedly a useful form of transport if you're intending to head out of Genoa to do some travelling around the region. However, the best option in the busy summer months is to take the train, where you can sit back and enjoy the passing scenery of Liguria. 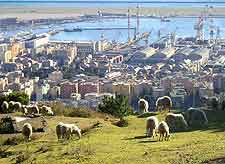 Genoa Cristoforo Colombo Airport operates daily flights from many major European cities, including London, Rome, Paris and Amsterdam. Shuttle bus transport takes visitors from the airport into the centre of Genoa. Alternatively, visitors from other international cities can choose to fly to Milano Airport, some 150 km / 93 miles away, and then travel into Genoa by train or hire car. 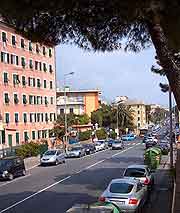 Heavy inner city congestion means that it's best not to bring your car into the centre. However, if this cannot be avoided, then the main car park is located at Piazza della Vittoria.

When exploring the region, a car does allow far more freedom than public transport. It is always worth taking a trip along the 'Riviera dei Fiori', the main road which runs along the Italian Riviera, between Genoa and the Italian frontier town of Ventimiglia. Alternatively, main roads take you out in the direction of Turin and Milan. Smaller regional roads are much slower, but do allow an opportunity to enjoy the scenery as you travel and discover some of Liguria's best-kept secrets. Bear in mind that the quietest months on Genoa's roads are in the spring and the autumn. 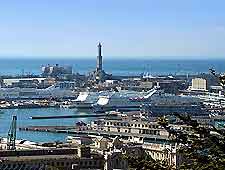 More than 600 buses transport visitors and locals around Genoa. Unless you plan to walk, buses are the best way to travel around the city. Regular VolaBus services run from the city's airport to Stazione Brignole train station, also stopping at Stazione Principe. A Rapid bus link also operates between Genoa's Stazione Principe and the city centre every hour.

Trains are a good and inexpensive method of travelling around Genoa and the surrounding region. Genoa has two main stations. The Stazione Principe is located on the west side of the city centre and is served by most mainline trains. Stazione Brignole on Piazza Verdi, to the east of Genoa, is the smaller of the two. 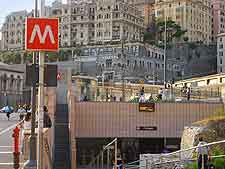 A small-scale underground train service operates within the city itself. However, there are relatively few stops and so this network may prove to be of limited use to visitors.

Taxi transport in Genoa can be booked in advance by telephone, or taxis can simply be picked up from a number of locations in the city. These include over 30 car parks, as well as train stations and Cristoforo Colombo Airport. The city's taxi cabs can be easily identified by their white paintwork.

Genoa is a major port and, as such, operates a number of popular ferry services. The weekly trip to Barcelona in Spain takes approximately 18 hours. Regular ferries also run between Genoa and Tangiers, in North Africa.