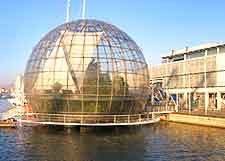 The Cristoforo Colombo Airport serves the Italian city of Genoa and its surrounding towns in the north-western Liguria region, as well as the Port of Genoa. The complex is constructed on a man-made peninsula and was recently renovated and upgraded at great expense.

Budget carrier Ryanair hosts most routes from Genoa, serving destinations such as London Stansted, Brussels, Madrid and Valencia, in addition to a seasonal flight to Ibiza. Full-service airlines include national flag carrier Alitalia, British Airways - serving London Gatwick, and Lufthansa, which offers a seasonal flight to <Frankfurt. Turkish Airlines provides a flight to Istanbul, while Air France flies to Paris. At present, the airport's single terminal serves over one million passengers a year.

This historic city lies on a narrow strip of land which is fronted by the Mediterranean and backed by rolling hills. Known as 'La Superba' for its glorious cultural past and impressive ancient buildings, Genoa reliably draws hordes of visitors each year, many of whom arrive via the Genoa Cristoforo Colombo Airport, which is named after the city's especially famous and beloved son, Christopher Columbus.

Address: Cristoforo Colombo, I-16154 Sestri Ponente, Genoa, Italy
Tel: +39 010 601 5461
Located just 6 km / 4 miles from the central district, the airport gives easy access to the port, as well as nearby Borzoli, Madonna del Gazzo, the Parco Villa Rossi and the Giardino Triestino Genovesi. The airport's location makes onward transportation by road straightforward. The well-signposted SS1 coastal express road runs past the port and marina, directly to the city, with this journey taking around 20 minutes in good traffic conditions.

The most direct route from the airport to Genoa is via the SSI Autostrada, also known as the Strada Alta Moro and clearly signposted to the city, passing by Comigliano Ligure. By car, it should take no longer than 20 minutes to reach the city centre.

Buses are located outside the exit of the Arrivals area, with the Volobus shuttle service being the best option for travel into the city. Its routes serve the city centre and the two main train stations, Brignole and Principe. This service runs seven days a week between 06:00 and midnight, and takes around 30 minutes.

A recently introduced bus service now runs between the airport and the Sestri Ponente district, giving access to the new Marina Genoa Airport on a half-hourly timetable between 06:15 and 19:15, or thereabouts. There is also a public bus service, as well as a Rapid Bus to the two main rail stations.

Official yellow or white metered taxis are found at the stand outside the Arrivals exit and provide the most convenient, yet most expensive trip to the city centre. It is best to agree on a fare, including any extra charges for luggage, before starting your journey.