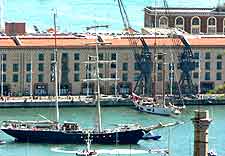 Italian towns and cities are renowned for their colourful festivals and Genoa is no exception. The city's festivals and many annual events celebrate everything from poetry and ballet, to regional gastronomy and the works of Genoa's most celebrated violinist, Paganini.

In addition, Genoa hosts many sporting events, trade fairs and seasonal celebrations. They are usually publicized in local newspapers and by local tourist office, so you can sure there are always plenty of things to see, do and enjoy.