As you'd expect from a city that has such a diverse and fascinating past, Genoa has plenty of tourist attractions. Its fine architecture, religious buildings and maritime connections offer Genoa's visitors a valuable insight into the city's history as well as life today.

Genoa also has a number of family-based attractions, which are guaranteed to keep everyone entertained, young and old alike. Tourists will particularly enjoy visiting the city's many historic buildings and churches, as well as the dolphins and penguins at the Acquario. 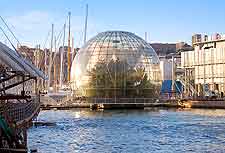 Address: Porto Antico, Genoa, Italy, IT
This dome-shaped greenhouse on the seafront is home to an ecosystem in miniature.

Within the Biosfera itself is a tropical environment, complete with exotic birds, plants and colourful butterflies. 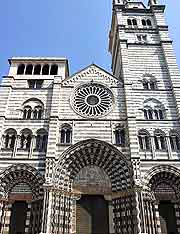 Address: Piazza San Lorenzo, Genoa, Italy, IT
Genoa's cathedral is easy to spot, thanks to its distinctive black-and-white striped façade. Inside is the Cappella del San Giovanni Battista, a chapel that is dedicated to St. John the Baptist and is said to be the resting place of the saint's relics. Perhaps one of the cathedral's most memorable stories of modern times is that of the night a bomb landed on the cathedral during the Second World War. It failed to detonate however and, thankfully, this popular historical attraction survives to this day intact.
Open hours: daily - 08:00 to 12:00 and 15:30 to 19:00
Admission: free

Address: Piazza Giacoma Matteotti, Genoa, Italy, IT
This 16th-century church was originally the seat of the Jesuit order in Genoa. Admirers of Rubens' work may like to look out for two works painted by the artist - one hangs over the altar, whilst the other is on display in a side chapel of the church.
Open hours: daily
Admission: free 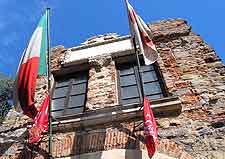 Address: Piazza Dante, Genoa, Italy, IT
Tel: +39 010 246 5346
Situated next to Genoa's Porta Soprana is the 'Casa di Colombo'. This famous explorer's house was heavily reconstructed during the 18th century, but is nevertheless much-loved by the Genoese as the childhood home of their most celebrated citizen and remains a popular attraction. Today, this tiny house is furnished in a style which is in keeping with Christopher Colombus' childhood years.
Open hours: Saturday and Sunday - 09:00 to 12:00 and 14:00 to 18:00
Admission: charge 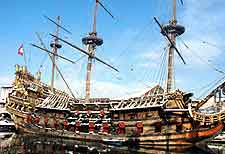 Address: Molo Ponte Calvi, Genoa, Italy, IT
Children will love to explore this pirate ship and find out about the life of a Genoese pirate in the 17th century. The Il Galeone Neptune ship was built especially as a prop and used in the film Pirates, directed by Roman Polanski and first screened in 1986.
Open hours: daily - 10:00 to 18:00
Admission: charge, discount available for children 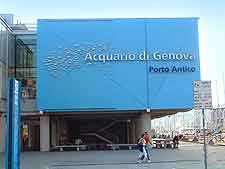 Address: Ponte Spinola, Genoa, Italy, IT
Tel: +39 010 234 5678
Discover fish of all shapes and sizes at the Acquario, as well as a whole host of other aquatic creatures, including seals, dolphins, penguins, jellyfish, crabs, eels and turtles. Younger visitors can help feed the animals at special feeding times. Genoa's aquarium is reputed to be the one of the top attractions of its kind in Europe, so it's sensible to allow at least two hours for your visit.
Open hours: Monday to Friday - 09:00 to 18:00; September to June, Saturday and Sunday - 08:45 to 19:00; July and August - 09:30 to 23:00
Admission: charge, discount available for children