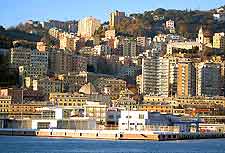 The city of Genoa extends for miles along the Mediterranean coast, with some neighbourhoods extending down to the sea, whilst others are perched precariously on the hillsides above.
Genoa's layout isn't particularly easy to grasp.

As a rule of thumb, it's worth remembering that, from the Old Town district, the city's two main railway stations and surrounding neighbourhoods are only a relatively short walk to the east and to the west. Head downhill and you will reach Genoa's historic port district of Porto Antico, a vibrant area which is enjoying a new resurgence of interest.

Genoa's Centro Storico district is packed full of beautiful buildings, impressive churches and historic squares. As well as visiting this neighbourhood's main attractions, it's also worth just wandering around the maze of connecting alleyways and narrow streets. With their ancient tenement buildings, it's possible to get a real sense of the city's extremely rich past. The area is mostly free from traffic.

Head downhill from the Old Town and sooner or later you will arrive at Genoa's Old Port district. Until not too long ago, this neighbourhood was in a poor state of repair. Today, it has become one of the area's top attractions, thanks to a great deal of recent renovation work and public support.

Near to Stazione Brignole is the vast Piazza della Vittoria as well as one of Genoa's major shopping streets, Via XX Settembre. At the street's most easterly point is Piazza de Ferrari, on the edge of the Old Town district.

Many of the city's major museums and other monuments are located in and around the area which extends from Genoa's main railway station (Stazione Principe) in the west of the city centre, down through Via Balbi to Via Garibaldi, just north of Genoa's Old Town district.

Uphill from the centre of Genoa, the district of Castelletto is a residential neighbourhood. Accessed by two lifts, Castelletto sits high above the rooftops, perched above the city itself. The journey up there is well worth it, with fine views over the city and, of course, over the vast expanse of the Mediterranean Sea.

This neighbourhood of Genoa was originally a fishing village but has long since been swallowed up by the city as it has spread along the coast. Boccadasse, with its prettily coloured houses, is a popular destination for families at the weekend. It can be reached by walking along Corso Italia in the direction of the sea.