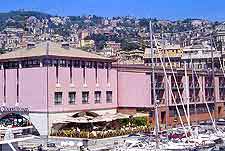 Genoa offers a wide range of dining venues, from cafés and patisseries to restaurants and family-run trattorie. Most of the restaurants in and around Genoa retain traditional Italian décor. However, in recent years some have to chosen to adopt a more modern or minimalist look.

As in the rest of Italy, Genoa's restaurants and eateries serve mostly Italian and regional cuisine, although there are a small number that offer Chinese, Mexican, and North African menus.

Traditionally, breakfast consists of a cappuccino and a croissant or brioche. Visitors can opt to take breakfast in their hotel, or head out into Genoa to join the city's locals at one its many bars or cafés. Many of these open from around 08:00.

Restaurants and trattorie in Genoa tend to open for lunch between 12:00 and 15:00. In the evening, diners arrive from 19:30 onwards, with restaurants closing at 23:00 or sometimes later. Take note that they will close for one day in the week. The day varies from restaurant to restaurant, so it's advisable to check in advance. Likewise, a small number of dining venues, cafes and bars may choose to close during August, whilst the owner takes an annual holiday. 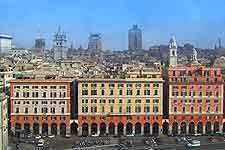 Located at the heart of the Liguria region, Genoa serves what is widely described as 'Mediterranean food'. As well as the popular pizza and pasta dishes that you'd expect to see when visiting an Italian restaurant, Genoa's eateries boast an unusually high number of regional dishes. Perhaps the best-known is pesto. Made from basil, garlic, pine nuts and pecorino cheese ground together in olive oil, it is usually used as a sauce on pasta. It is also an ingredient in a local variation of minestrone soup.

As you would expect from a sea-faring city, seafood plays a major role in Genoa's cuisine. Locally-caught anchovies appear on restaurant tables, along with other varieties of seafood, such as octopus, mussels and scampi. Zuppa di pesce, a soup made using mussels and rock fish, also features on many menus.

Snacks and fast food are also a specialty of Genoa. These include focaccia, a type of flat bread made in the area and often stuffed with olives and onions, as well as various sorts of vegetable torta or pie. Chickpeas are farmed in the region and appear in a number of dishes, including farrinata, a snack made from chickpea flour and olive oil and stuffed with ricotta cheese.

For dessert, head to one of Genoa's excellent ice cream parlours to sample freshly made gelato. Turkish delight and candied fruits are also local delicacies. 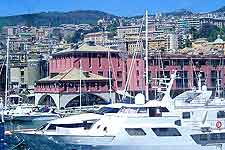 If you're sightseeing in Old Town Genoa and don't want to stop for a full lunch, then there is no shortage of places to enjoy a quick snack. Most cafes serve focaccia or other fast-food delicacies. Alternatively, there are plenty of good bakeries where you can buy the ingredients for a simple picnic.

For those visitors who have more time for dining out and want to relax over lunch and sample authentic Italian atmosphere, it's worth trying one of Genoa's many trattorie. Again, there are dozens of these in the Old Town district. Usually no-frills places, these are often the haunt of local workers who come to socialize, as much as to dine. Meals are hearty fare and served at a reasonable price. Genoa is also renowned for its seafood dishes. Indeed, seafood cuisine dominates the many restaurants clustered around the city's Porto Antico district.

If you prefer to eat somewhere less informal, then Genoa also has places where you can enjoy fine dining in more refined surroundings. One restaurant in particular has acquired a cult following, thanks to its celebratory clientele. Zeffirino on Via XX Settembre was once the haunt of Pavarotti and Frank Sinatra.