Getting Around, Peterborough Travel, Transport and Car Rental 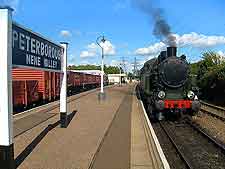 Due to Peterborough's rapid expansion in recent years, it is a city that is prone to suffer from congestion at peak travel times, although these are generally short lived. Public transport comes in the form of city buses, with principal services in Peterborough being provided by both Stagecoach Cambridgeshire and Delaine Buses.

Several major road schemes have recently been completed around the city, further improving connections with Cambridgeshire, East Anglia and beyond. If you prefer to travel by train transport rather than driving yourself, then you will be pleased to learn that Peterborough stands on the East Coast Main Line, and is under an hour away from London by rail.

The following list shows the most significant airports within the region, all of which are within relatively easy reach of Peterborough and Cambridgeshire: 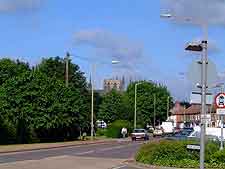 Enjoying a fairly central situation in the United Kingdom and surrounded by A-roads, Peterborough is linked to London, by the A1 (M) road. Roughly following the route of the historical Great North Road, the A1 heads in a southerly direction and passes St. Neots, Sandy, Biggleswade, Baldock, Letchworth and Stevenage. To reach Cambridge to the south-east, you will also need to travel along the A1 (M) and join the A14 at Huntingdon. Driving around central Peterborough doesn't present many challenges and there are plenty of places to park. Car parks are located at the bus and train station, next to Westgate Church and the Queensgate Shopping Centre, on Bishop's Road and Embankment Road, and at the Riverside Shopping Centre.

Bus transport in the city is operated by a number of different companies, which are based at the Queensgate Bus Station. City buses travel between all of the main places of interest and surrounding towns and villages, with popular destinations including Arthur Mellows Village College, Bretton, Dogsthorpe, Ferry Meadows, Hampton Hargate, Hampton Serpentine Green, Longthorpe, Lynch Wood, Orton Mere, Parnwell, Paston and Werrington.

Stagecoach and National Express buses also travel to and from Cambridge, with this journey lasting approximately one hour. However, some bus services between Peterborough and Cambridge may require a change at Huntingdon, adding a small delay to the overall journey time. 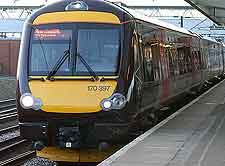