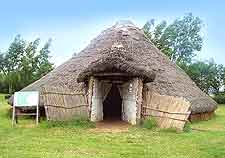 The city's interesting history is explained in great detail at the Peterborough Museum and Art Gallery, where many of the exhibits have their very own story. Various interactive displays have been designed with younger visitors in mind, while a constant changing and rotation of exhibits means there is always something new to see.

Located just outside of Peterborough is the Flag Fen, a museum-type attraction regularly referred to as Britain's Bronze Age Centre and Archaeology Park. This ancient and extremely important site was only discovered in the early 1980s, when the area's dykes were being carefully surveyed.

Address: Priestgate, Peterborough, Cambridgeshire, PE1 1LF, England, UK
Tel: +44 01733 864663
***The museum is undergoing a £3.2 million refurbishmen so will be closed to visitors until March 2012***
In total, there are in excess of 200,000 artefacts and objects within the Peterborough Museum, with the most appealing ranging from an ancient Iron Age sword and Roman helmets, to fossils of marine creatures from the Jurassic period, such as ichthyosaurs and plesiosaurs. The art gallery here is a worthy addition to the attractions and is home to innumerable paintings, sketches, drawings and sculptures, which date from the early 17th century, right up to the present day. Of interest, in recent years the Peterborough Museum has appeared on Living TV's popular show 'Most Haunted' (presented by Yvette Fielding) since it is renowned for its night paranormal activity.
Open hours: Tuesday to Saturday (and Mondays during school holidays) - 10:00 to 17:00, Sunday - 12:00 to 16:00
Admission: free 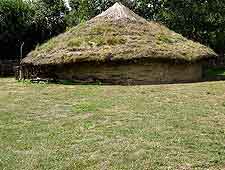 Address: The Droveway, Northey Road, Peterborough, Cambridgeshire, PE6 7QJ, England, UK
Tel: +44 01733 313414
Believed to have been used for religious purposes, the Flag Fen is made up of a large number of poles, which are arranged in five rows and stretch across the fenland, connecting Peterborough with Whittlesey Island. The museum exhibits comprise the various artefacts that have been discovered during excavations of the site and include what is thought to be the oldest wheel in the country. There is also a very convincing reconstruction of a traditional Iron Age roundhouse. Nearby and worth a look is a section of the Fen Causeway - a well-preserved Roman Road that crosses the entire site.
Open hours: March to October, Tuesday to Sunday - 10:00 to 17:00
Admission: charge, discounts for members of the English Heritage, seniors, students, children and families (two adults and up to three children), children five years old and under are free

Address: Oundle Road, Peterborough, Cambridgeshire, PE2 9NR, England, UK
Tel: +44 01733 344240
Filled with restored locomotives and numerous exhibits relating to the 'Steam Age', the Railroad Museum is to be found alongside the Nene Valley Railway and on the southerly banks of the River Nene. The need for sustainable transport and a reduction in carbon dioxide emissions is also explained, while further exhibits include much railway memorabilia, and the United Kingdom's first ever hover train. Children will enjoy the miniature railway garden, the Grand Environmental Maze and the miniature Japanese bullet trains. Picnics are welcomed in the adjoining Wildlife Haven (Peterborough Environmental Project), where walkways, an observation mound, a steam generator and views across the East Coast Main Line await visitors.
Open hours: April to October, Tuesday to Thursday, Saturday and Sunday - 11:00 to 16:00
Admission: charge, discounts for seniors, children are free 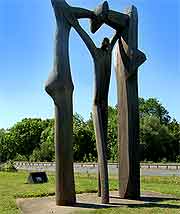 Address: Ferry Meadows, Ham Lane, Peterborough, Cambridgeshire, PE2 5UU, England, UK
Tel: +44 01733 234443
For many, the Peterborough Sculpture Park is a real surprise and adds a genuine cultural vibe to the city. Situated within Ferry Meadows, this open-air art gallery forms a sizeable proportion of a the city's sculpture collection, with further pieces being spread all over the city centre. The most important of these sculptures are entitled Bird in Flight, Cormorant, the Endless Omen, the Lynchwood Seat, Power Rhythm and the wooden Peterborough Arch, the latter of which was created by acclaimed Norfolk artist Lee Grandjean, and has been carefully designed and positioned to line up with the cathedral. Being set outdoors, the appearance of the sculptures is greatly affected by the weather, and they are slowly beginning to naturally age with time.
Open hours: daily
Admission: free