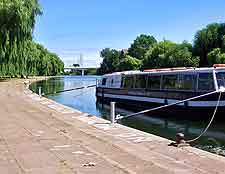 With guided walking tours, boat trips along the River Nene and steam-train rides on the Nene Valley Railway, there are lots of different ways to see the tourist attractions of Peterborough. There are also evening candlelit ghost walks around the reputedly haunted Cathedral Precincts for those brave enough to learn about the more spooky and eerie attractions of Peterborough, led by suitably attired guides.

Tourists may also like to visit the nearby Sacrewell Farm and Country Centre, and afterwards head to the Peterborough Greyhound Stadium in the Fengate area, or take in a show at either the Key Theatre or Broadway Theatre. The recreational attractions of the Peterborough Millennium Green Wheel should also not be overlooked and include endless pathways suitable for walking and cycling. 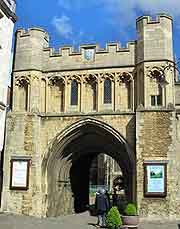 Address: Peterborough Museum and Art Gallery, Priestgate, Peterborough, Cambridgeshire, PE1 1LF, England, UK
Tel: +44 01733 343329
Organised by the Peterborough Museum and Art Gallery, guided walks of the city are becoming increasing popular, with the meeting point being just outside of the entrance. Walking tours take place throughout the year, regardless of weather, and those concerned about the possibility of rain can rest assured that there are plenty of places to shelter along the way. Most tours generally last 90 minutes or thereabouts and include a number of different themed tours, such as the Crime and Punishment Walk, the Historic Peterborough for Children Tour (during school holidays), the Inns and Taverns Walk, the Tudor and Stuart Walk, the Victorian Walk and the Women of Peterborough Tour, amongst others.
Open hours: seasonal variations, most walks start at either 14:00 or 19:30
Admission: charge, discounts for seniors, full-time students and children under 16 years old 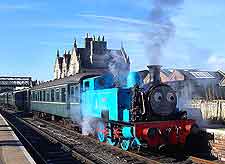 Address: Wansford Station, Stibbington, Peterborough, Cambridgeshire, PE8 6LR, England, UK
Tel: +44 01780 784444
A preserved historic railway with origins in the middle of the 19th century, the Nene Valley Railway stretches for around 12 km / 7 miles and links the station of Peterborough Nene Valley with Yarwell Junction. Along the way the train stops at Orton Mere, Ferry Meadows and also Wansford. After the line was closed in 1966, the Peterborough Locomotive Society was formed and worked hard to reopen this railway, acquiring steam locomotives from Germany, Poland and Sweden and extended the route at the beginning of the 1980s. The Nene Valley Railway is a 15-minute walk from the city centre and is an important heritage attraction, providing a pleasant way to escape the city for the day and explore the surrounding villages. Of interest, the line has featured in a number of famous television programmes and movies, including both the James Bond films 'Octopussy' and 'Golden Eye'. The rock band Queen also filmed their 'Breakthru' music video here in 1989, with the band being filmed riding a steam train now named the 'Miracle Express' after their album title. Each year, the railway's very own full-scale Thomas the Tank Engine replica is used during special events.
Open hours: April to October - seasonal variations, November and December - Santa specials
Admission: charge, discounts for children, families (two adults and up to three children) and seniors, children three years old and under are free 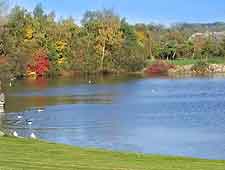 Address: River Nene Valley, Peterborough, Cambridgeshire, England, UK
Tel: +44 01733 234193
Situated just a matter of minutes from central Peterborough, Nene Park is a truly glorious country park and stretches for approximately 10 km / 6 miles along the banks of the River Nene. Within the heart of Nene park is a popular area known as Ferry Meadows, which has an excellent water sports centre, where you can hire sailing boats, rowing boats, kayaks and dinghies, as well as trying your hand at a spot of windsurfing. Further attractions at Ferry Meadows include seasonal pony trekking, a miniature railway and a camping site suitable for touring caravans.
Open hours: daily, April to October - 07:00 to dusk; November to March - 08:00 to dusk
Admission: free 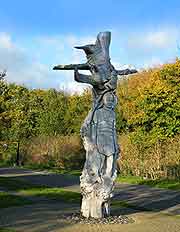 The award-winning Peterborough Millennium Green Wheel is a truly unique attraction and features an extensive network of pathways, cycle trails and bridleways, which stretches for some 80 km / 50 miles. Built to be used for recreational purposes, the Green Wheel encircles the city and is linked to the centre by a series of routes, which create the 'spokes' for this giant wheel shape. Well laid out with clear signposting, visitors can expect to find much tranquility, as well as lots of Cambridgeshire flora and fauna, countryside views and an intriguing sculpture trail. The Millennium Green Wheel was opened in 2000, with this ambitious project costing approximately £11 million, half of which was funded by the National Lottery's Millennium Commission.
Open hours: daily
Admission: free

Address: Park Crescent / Princes Gate, Peterborough, Cambridgeshire, PE1 4DZ, England, UK
A beautiful Victorian parkland comprising a host of themed gardens and attractions, Central Park lies on the northern side of the city. With formal, sensory and sunken gardens, Central Park is a firm favourite with families, who come here to play in the paddling pool, the playground area and in the sandpit, while the miniature golf putting green really does seem to appeal to all ages. There is also a pleasant picnic area, tennis courts, a bowling green and basic refreshments, provided at the Buttercross Tearooms.
Open hours: daily - dawn to dusk
Admission: free 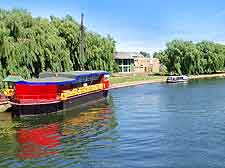 Key Theatre
Address: Embankment Road, Peterborough, Cambridgeshire, PE1 1EF, England, UK
Tel: +44 01733 207239
Broadway Theatre
Address: 46 Broadway, Peterborough, Cambridgeshire, PE1 1RT, England, UK
Tel: +44 01733 316100
Cresset
Address: Rightwell, Bretton, Peterborough, Cambridgeshire, PE3 8DX, England, UK
Tel: +44 01733 265705
After an evening meal, many visitors to Peterborough choose to take in a show. There are three main venues available in the city, offering everything from musicals and ballet performances, to drama, stand-up comedy gigs and concerts. The glass-clad Key Theatre on Embankment Road is particularly noteworthy and has a packed calendar of shows and events, being able to accommodate audiences of just under 400 spectators. Both the Broadway Theatre (next to the Central Library) and the Cresset also feature a diverse array of live entertainment and theatrical events, as well as changing exhibitions and various workshops.
Open hours: hours vary according to performance
Admission: charge for tickets

Address: Thornhaugh, Near Wansford, Cambridgeshire, PE8 6HJ, England, UK
Tel: +44 01780 782254
Located just over ten minutes away from central Peterborough and to the west, the Sacrewell Farm and Country Centre is the perfect family attraction. There are rabbits, shire horses, indoor and outdoor playgrounds, tractor and trailer rides, picnic areas, a working watermill and even a camping site. Children are encouraged to pet and feed the animals where possible. The Stables Restaurant is on hand for home-cooked meals, while the Three Little Ducks Shop is full of gifts and cuddlies.
Open hours: daily, mid-February to October - 09:30 to 17:00; November to mid-February - 10:00 to 16:00
Admission: charge, discount available for seniors and children between two and 16 years old, children one year and under are free, prices higher between mid-February and October (the high season)