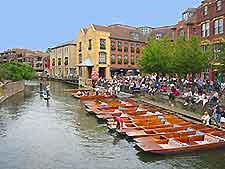 The Cambridgeshire area around Peterborough contains many enticing attractions and places of interest, suitable for day trips and short breaks. If you have time for a longer excursion, then attractions within the surrounding counties of Bedfordshire, Essex, Hertfordshire, Lincolnshire, Norfolk, Northamptonshire, Rutland and Suffolk are all within reach of Peterborough, being linked by road and rail.

A selection of grand stately homes and similar attractions lie just outside of Peterborough. The most visited of these include Elton Hall at the village of Elton, Grimsthorpe Castle at Bourne, the National Trust-owned Peckover House in Wisbech, Prebendal Manor at Nassington and Rockingham Castle in Market Harborough. 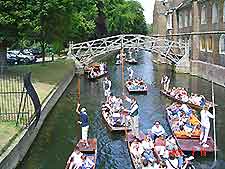 Families based in Peterborough will be sure to enjoy a day trip to the Butterfly and Wildlife Park at Long Sutton in Spalding, where many friendly animal attractions are to be found, such as guinea pigs, giant rabbits, goats, llamas, raccoons and bushy tailed possums. Also onsite is the Birds of Prey Centre, where daily flying displays take place at midday and again at 15:00.

The cathedral cities of both Cambridge and Ely are located to the south-east of Peterborough and easily reachable in under an hour. Cambridge is famous all over the world for its prestigious university, while Ely is considerably smaller and more low-key, being home to attractions such as the Oliver Cromwell Museum, the Wicken Fen and the Welney Wildfowl Centre, 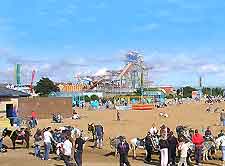 At around an hours' drive from Peterborough and located to the north, the Lincolnshire market town of Boston features a small port and the largest parish church in the country - St. Botolph's Church, or 'The Stump' as it is affectionately known. Nearby, Spalding also makes for an appealing day trip, where the 15th-century Ayscoughfee Hall is a real highlight, along with the Annual Spalding Pumpkin Parade each October.

If you travel for an hour to the west of Peterborough you will soon encounter the delights and attractions of Leicester city. The National Space Centre in Leicester is a particular must-see, while the Cathedral Church of St. Martin and the Guildhall add a more historical flavour to the city centre.

To the north-east and situated on the coastline, the seaside resort of Skegness is just under an hour and a half from Peterborough and has a pier, a wide sandy beachfront, a seal sanctuary, a theme park and traditional amusement attractions. A similar distance away, only this time to the north-west, Nottingham makes the very most of its rich Robin Hood heritage.